There has to be a beginning

In this case, a slightly delayed one as the post I tried posting twice over the weekend did most emphatically not want to and it was too hot to make it behave like a blog and not a recalitrant teenager.

So here we are. This is not my first time blogging. I ran one for years that closed simply because the weight of the situation I was living in felt like it was too much to allow me to write freely. We will see if this new situation does.

But I am tired, oh so tired, of how social media is so damn polarised. Micro-blogging isn't satisfying and Twitter threads are annoying. Also, it's getting harder and harder to find the good news in anything or the reasoned voice or the nuanced debate. It's all shouting and no platforming and seeing how controversial you can be just for the sheer "likes" of it.

I don't likes it. If I want ranting and irrational screaming into the void, I'll stop taking my hormones and wait for the fact no one ever puts a glass in the fucking dishwasher to become overwhelming. As my boyfriend would say, hold my pint.

So this blog is very firmly about the good and real and positive in the world, because I am in a place where good and positive things are happening (glasses/dishwashers aside), so I want to share it. My mental and physical health are better than they've ever been, just in time for the menopause, and I have the best walk into work ever. 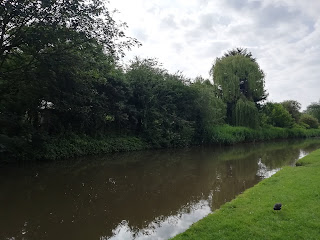 We goes along the canal which is mostly calm and peaceful. The houseboats are starting to line the bank: collie dogs and terriers jump off as they moor and start chasing each other, there is a smell of bacon frying and the gentle sounds of a couple rowing over who did the most work at the locks..."If you can't cope now Sandra, how will you manage when we get to Birmingham?"

In the picture above, behind the row of trees, is my allotment. Waited 2 years for that to become available and then started the moving house process pretty much as soon as the paperwork was signed. Safe to say, not much has been done there yet bar sticking some membrane over the beds and strimming the wild patch. 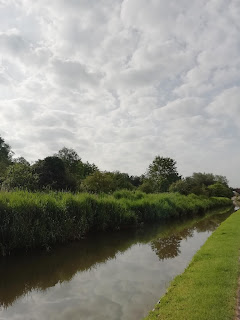 But it is my long-awaited allotment on which I will grow raspberries and small fruit trees and flowers and you know, stuff. Plus, it's a 5 minute walk from the new house and is right next to the nature reserve as well as the canal. The reserve is rather splendid with orchids, foxes and badgers, slow worms and butterflies. There was a homeless man camping there for a little while but he seems to have gone now. I hope he has a house of his own too.


Then we go past the bus depot wall which has a pleasingly rusty, weather-worn surface. Eaten away by time and oxidisation (now isn't that a good word to say?), it's exactly the sort of wall that the Smiths would have posed in front of for an album cover before Morrissey became too, well, Morrissey. 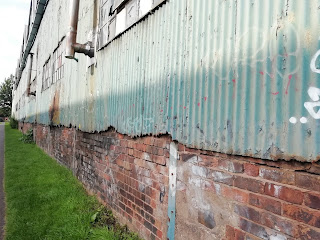 So now, for the final stretch, I have This Charming Man playing in my head, looping the chorus over and over like a stuck piece of vinyl. Until I look up.

The duck has something important to tell you: "Pause the shouting, settle on down and let the good stuff roll over you." 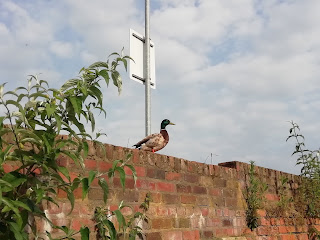 At least, I'm sure that's what he would have told you if duck bills were engineered to say things like that. As it was I didn't ask, merely nodded and moved on after the shot, promising that this will be a blog free of nasty things. Let him contemplate all he surveyed while I crossed the bridge and made my way past Asda. Which is unphotogenic and nasty, so I didn't photograph that.


What I am reading this week: Case Histories by Kate Atkinson. There is a new Jackson Brodie book due out soon, so I'm rereading. The woman is juggling so many plots, it's making my head spin (in a good way) and there's nary a wobble in any of them.

What I'm watching: the Women's World Cup. Turns out I don't hate football after all.

What I'm listening to: The System Only Dreams in Darkness by The National. Earworm courtesy of the Boyfriend. Also watched the Stormzy set at Glastonbury. That was something else.