A delayed catch up on what I read during May as it didn't seem right to plunge straight into it. I'm still processing what's happening right now, and that included a lovely, distanced, debate with my Dad yesterday after the toppling of the Colston statue. I think he expected me, as a museum person, to be against it but statues aren't history.
Statues are what we put up when we think someone has achieved such greatness that they merit our attention. Slave traders do not merit our attention and they sure as hell don't deserve commemoration, no matter how much money they gave to a city.
Bristol council ignored repeated petitions, letters and peaceful calls for it to be removed, and they ignored them. Which marks them out as moral cowards at the very least. Good riddance to the damn thing. I only wish they'd left it in the water.
Anyway, books. Books are what I do, and here is what I did.
The Secret Garden by Frances Hodgson Burnett
Tom's Midnight Garden by Phillipa Pearce
Letters from a Faint-Hearted Feminist by Jill Tweedie
Visitors Guide to Tudor England (for work) by Suzannah Lipscomb
Count Me In by Christine McDonnell
The Colour Purple by Alice Walker
The Outrun by Amy Liptrot
H is for Hawk by Helen McDonald
Sightlines by Kathleen Jamie
A Slip of the Keyboard by Terry Pratchett
Equal Rites by TP 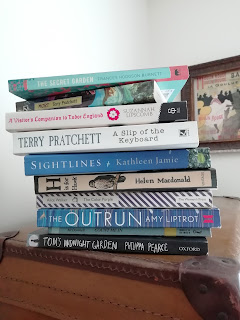 After reading Lucy Mangan's Bookworm, I was inspired to revisit some childhood favourites and then segued into non-fiction before coming to land on Terry Pratchett.
I miss him and wonder how the insanity of the recent months would have played out in Discworld, incidentally the only sci-fi/fantasy series I can bear (don't. I've tried. But much like historical fiction, there is something about the way it's written that makes me grit my teeth). And, as I work my way through what copies of the series I have, I wish more than ever that second hand bookshops were open so I could top up my collection.
After my previous post, I have been thinking even more about what I can do. Bringing out The Color Purple, as much as I love it, for a re-read isn't going to change the world. So I've made myself a pledge. Every month for the next 12 months, I'll be buying a book by a BME author, brand new and not from Amazon. Fiction or non-fiction.
This month, I'm kicking off with Toni Morrison's last book of essays and meditations, Mouth Full of Blood (actually purchased just before lockdown) and David Olusoga's Black and British: a Forgotten History should be with me by the end of the week.
It's a small step, and one with results that will probably change the world for only me. But maybe, by starting here, by being able to have the facts to hand the next time I'm in a conversation with family and friends, I'll be able to change their thinking, one sentence at a time.
- June 11, 2020