I genuinely didn't expect to get much reading done in July. There was too much to do outside, too much work to do and my brain was skittering around like Mabel on our tiled kitchen floor.
Actually, Mabel is responsible for the fact I did read so much. On my 2nd week of being signed off, she joined the family and, being so small, spent quite a lot of time sleeping in the crook of my elbow whilst I tried not to fret on the sofa. It would have been cruel to move her, so what else could I do but pick up a book from the top of the teetering To Read pile and, well, read. 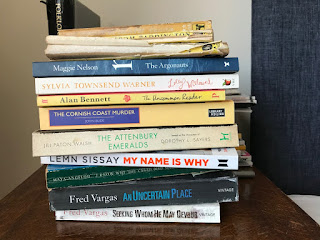 And slowly, as she settled in, warm and soft and purring, my brain slowed its skittering. At the start, I read but couldn't tell you what the pages contained, the words just washed over me. 2 books jolted me out of that: My Name is Why by Lemn Sissay and The Argonauts by Maggie Nelson. They were astonishing. Sissay's for his unsparing account of a childhood spent without love and understanding; Nelson's for her exploration of gender, sexuality and family. Sissay's made me cry, Nelson's made me smile.
To complement the Sissay, I thoroughly recommend the Imagine documentary on the BBC. Normally Yentob gets right on my pip but this was sensitively handled with enough space left for Sissay to fill with his own words.
Angelou I've talked about before, my love of Vargas and Christie continues (and not just for the hokey covers, but seriously, have you seen a more hilarious Christie cover than this one?). 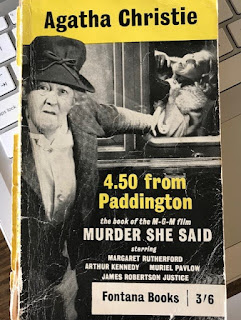 I approached The Attenbury Emeralds with an open mind but it was not good. The tone was off, the dialogue hit duff notes, the plot far too complicated and rushed and, oh, it just wasn't satisfactory. As a long time Sayers' fan, I should have known better. It was a bit like Sophie Hannah's attempts at Poirot stories: well intentioned but just not right.
But I'm going to end on a high note: my pal, Liz Hyder, won the Waterstones Young Adult Book of the Year last week and I'm pleased as a pleased thing that's just had some pleasing news! Bearmouth was one of my books of the year last year - it's an incredible piece of writing with a unique story and an unforgettable voice in Newt. An absolute must-read for any young adult in your life.
July books:
Seeking Whom He May Devour - Fred Vargas
An Uncertain Place - Vargas
I Know Why the Caged Bird Sings - Maya Angelou
My Name is Why - Lemn Sissay
The Attenbury Emeralds - Jill Paton Walsh
The Cornish Coast Murder - John Bude
Lolly Willowes - Sylvia Townsend Warner
Uncommon Reader - Alan Bennett
The Argonauts - Maggie Nelson
Cat Among the Pigeons - Agatha Christie
The 4.50 from Paddington - Christie
Hound of Death and Other Stories - Christie
- August 03, 2020