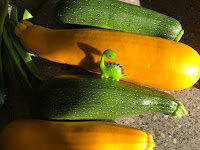 When I lived in the countryside, the arrival of summer fruit season would always bring me joy. I'd search out the nearest pick your own place to take the kid and gather huge punnets of strawberries and raspberries. Some of them got made into jam, most were just eaten with fingers, with ice cream, in cakes. Blackberries ditto.

And I would always feel rather virtuous and smug. Look at me, making the most of the bounty of the land! Hand me my tweed jacket and walking boots for I am a child of nature!(Not quite as child a nature as the new plot holders on the site who were spotted smearing their faces with mud from their site. They could be an interesting addition to the social mix).

How little I knew.

Now I am bound to the city and have an allotment on which to pretend I know what I'm doing, the word harvest has taken on a whole new meaning.

The combination of a few days being busy with projects at home, the scorching sun followed by the rains followed by more sun, meant that when I finally got up to the plot this evening, I was greeted by courgettes (more of them!) the size of my arm, runner beans so big and fat the breeze couldn't move them and bindweed growing with abundance over the site of the fruit cage.

Half an hour's hoe work and one blister later, the latter had been conquered for at least...oooh... 2 days if I'm lucky.

So far, courgettes have been turned into soup, chutney, flatbread, bhajis and, new in this week, a tart with a tahini and yogurt cream which was delicious in the extreme. The runner beans have been blanched and frozen, eaten hot from the pan with gravy and roast potatoes, and eaten warm with a dressing of olive oil, balsamic vinegar and dijon mustard. The giant cucumber (only 2 so far) have been pickled for me to eat with some salmon later this week.

We were left a small bag of greengages which, supplemented with some plums, I turned into a sort of jam. I say sort of because I foolishly left it to cool before putting it in jars: by the time I got to it, the syrup had stickified (totally a word) itself to the roasting pan and had to be coaxed off. I'm sure it'll taste just fine...

Anyway, the 2 jars of that are now on the new "preserves shelf" in the utility room (I put a lot of plastic boxes in recycling for that to happen), along with the pickled beetroot and courgette chutney.

The boyfriend has yet to make his runner bean chutney. We are going to need more jars.

Of the squash I planted a few months ago, so far, apart from their tendrils spreading all over 3 beds, I can see only one promising green one. The tiny patty pans, which are my favourite, seem to have rotted before they were ready, which is a shame. The cabbages are doing fine in their butterfly and pigeon proof cage.

Next year, there will be a fruit cage filled with raspberries and strawberries, an asparagus bed to tend and the start of the new mini orchard. I can't wait to be even shorter of cupboard space and for the house to smell of vinegar and jam sugar.

On a side note, did anyone else stand in their garden during the break in the weather last week, arms outstretched, yelling "it's about bloody time!" at the skies? Oh the cooling rain! I'm not a natural heat lover and the only person I know who craves a holiday home in Iceland to escape to during British summertime.

If I could just win the lottery...

Email ThisBlogThis!Share to TwitterShare to FacebookShare to Pinterest
Labels: allotments, cooking, Craving, food, happy, life, runner beans, Skills I Do Not Have, summer