August at the Allotment

I've always found August a strange month, weather wise. We're just as likely to have storms and overcast days as we do sunny ones. Twice, I found myself looking longingly at tights, or having to call the Boyfriend for a lift home because I'd been caught out in summer gear and it was raining fit to bust the drains. We stayed away from the crowds by staying at home and focusing on the garden there, as well as the allotment.

In truth, the latter needed little in the way of attention other than regular strimming, weeding and harvesting. The garden at home however...it's fair to say we inherited a blank weedy slate where that was concerned and this year, after 12 months of watching it's moods and the way the light shifts round it, the Boyfriend was ready to spring into action: painting fences, putting up trellis, digging in flower beds and laying a new path. It's all looking good. Next up is a pond.

I focused on the harvest at the allotment and, in truth, was glad when the courgette plants had exhausted themselves. They were pulled up, some compost dug in and then swede and turnip seeds planted. I'm a little late with the turnips, but hope (and Indian summers) springs eternal. 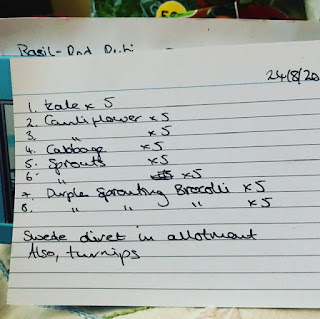 Also, turnips. The name of my blue grass band.

We had some sizeable gales that took down another tree at the canal-end of the plot, so I'm now waiting for the only tree surgeon (he's probably not but he's the only one the site reps use, so he's much in demand and lacksadaisical when it comes to replying to messages) in the city to come and get rid of the fallen ones. After some thought, I've decided that the remaining elder can come down too. As 2 of it's siblings have proved too feeble to stand upright any more, I think the future stability of the last is probably in question. Down it will come, then I can clear the area and finally get a shed up there.

A shed that I will paint blue with a yellow door, with deckchairs inside and a curse that will automatically cast on anyone who breaks into it with malicious intent. Not that I've given this any thought, you understand.

It is with great sadness and no glee At All that I must report that the Big Bean Structure also took a pounding in the storms and toppled over...oh, okay; I'll admit to a small jig of glee. 40 runner bean plants are too many, even for a man with a chutney plan, and especially for a man with a chutney plan but very little will to actually pick the damn things. Next year he is restricted to just 10. 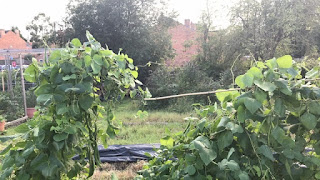 Membrane went down over what will be the asparagus bed. I blooming love asparagus but I do not love the £2.99 for 6 stems price tag you find in most supermarkets, so I shall Grow My Own next year. This has also been prompted by the fact I've seen asparagus fronds in there over spring and summer, so there's clearly already something asparagus-like in there. I'm hoping that simply by clearing the impacted weeds from the surface, we may actually see it return in the spring. That, or I'll have to buy my own seeds and it'll be another 3 years before we get a crop to it. Totally worth it. 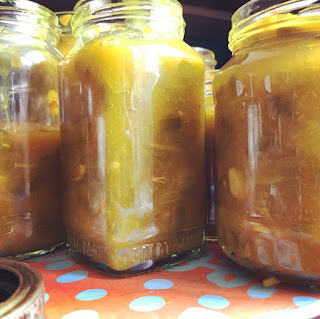 Of course, August was also all about the damsons and I'm pleased to report that my first ever attempt at damson jelly turned out just fine, despite the local shop's lack of preserving sugar (I used plain old granulated). It is slightly more mobile than jelly should be, so I've christened it Damson Lava, but it is still darned good. I had a bit of a damson jelly epiphany when I realised that's probably what we soggy old Brits used before cranberry jelly turned up: I'll be testing my theory against the stodge of Christmas dinner and will report back.

The world is still very much hell-in-a-handcart right now in ways that I worry about but cannot let override my need to carry on like there's a future. An hour or 2 up on the plot sorts me out. This morning as I contemplated the next job, there was a family of long tailed tits in the tree above me, the fledgelings still tiny and fluffy. Wherever there are tits, there is hope.

And yes, you may put your own spin on that. Just don't tell me about it. 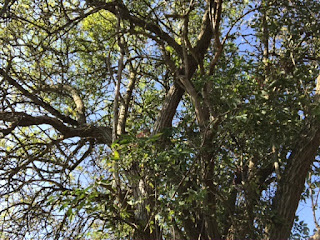 Visit profile
"I want to feel what I feel. What's mine. Even if it's not happiness, whatever that means. Because you're all you've got."
Toni Morrison