The other day I lowered myself into the pool for one of my weekly swims, ready to enjoy the warm water, the solitude, the movement without pain from my feet etc etc, when I realised realised that most of the pool lights were switched off. No one else was around and it was quite dark in there. This was a little eerie, to say the least but it takes more than eerie to put me off, so undaunted (nothing gets between me and my swim...apart from my own laziness), I took another step down the ladder and...

Something awful had happened. Something catastrophic. Something that caused me to inch my way into the water muttering out loud, "Holy Mary Mother of God, Jesus and all his blessed Saints" like Mrs. Doyle falling down the stairs (yep, I'm working that 2% Irish DNA in my system until I get a damn passport). A scene which, by the way, is completely overshadowed by the "So you're a racist now Father" spiel from the same episode* - also brilliant but not the comic masterpiece of a middle-aged Irish housekeeper falling down a flight of stairs while reciting the above.

Anyway, what had brought this on, you ask? Well, the water was FREEZING. Like a good 10 degrees colder than it had been yesterday and there'd been no warning from the girl on reception, no cheery "brace yourself!" as I walked past her. It was like stepping down into the North Sea in February.

So what to do? Get out or stay in? Get out, get warm, get to work early? Stay in, stay with the schedule, stay active?

Reader, chump that I am, I stayed in.

I stayed and I swam the hell out of that pool. Desperate not to turn blue, catch pneumonia or go to work early, I stayed in that water and I swam. Cut my usual 14 strokes per length (it's a small pool okay?) down to 10 and swam like it was the only way to ever be warm again. I swam that mother-fucking pool and felt like a champ.

Until I paused (for breath) and looked back.

The only person in there was me. The lack of light made the water looked a darker blue than usual. It also looked a bit choppy because of aforementioned activity. It was still cold and far over I could see a weird shape in the water.** It looked like it might be moving, but of course, that was just the movement of the water.

Before I really had time to get my rationality back on track, they were back and populating the pool. The Invisible Sharks. These had been my secret phobia when I was a kid: scared of sharks and convinced that no matter how inland the pool, how chlorinated the water, or how populated with people, there were Invisible Sharks in there and they were looking for small scared kids who splashed too much and didn't swim so good.

Suddenly I am 6 years old again. 6 years old in a rainbow striped swimsuit. Not a strong swimmer and not confident enough to stand up against the swimming instructor who can't understand why I'm having trouble. At the far end, the bigger kids are diving for black bricks thrown into the water for them to retrieve and I cannot for the life of me imagine why they would willingly do that, what if there are sharks in there? Obviously there aren't because I can't see any but What If They Are Invisible?

God only knows what I'd been reading to invent invisible, chlorine-loving sharks. I hadn't watched Jaws (and no, I still haven't). I hadn't been taken on holiday anywhere sharks lived. I hadn't got a relative with a nasty shark-related injury. But there they were, all of a sudden, and you could only see them if you stared hard enough at the way the water moved in the pool.

It took years to forget them.

I became an adult, I swam in shallow waters, sometimes in the sea but mostly in pools. I insisted on being able to see the bottom of whatever it was I was swimming in. I forgot the sharks but they hadn't forgotten me.

Of course, now I am an adult and Above Such Childish Things so I gave myself, and the sharks, a stern talking to, took a breath and started swimming again. Carefully, so I didn't disturb the water too much. God only knows what I must have looked like, a middle aged woman staring down in the water while head is held resolutely above, fists clenched, making my front crawl very unwieldy as well as incredibly slow.

5 more lengths and it was time for me to get out and head to work***. The sharks stayed away and I emerged intact and triumphant. Stuck my tongue out at them as I left. The hot water in the shower afterwards has never felt so good. 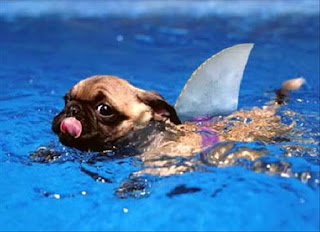 *Wikipedia link to the episode if your fancy is to have all the humour sucked out of it
**turned out to be a differently coloured tile I'd never noticed before, but still
***I've since swum 4 more times, so I'm completely over this phobia and not at all crazy.
- October 17, 2020

Email ThisBlogThis!Share to TwitterShare to FacebookShare to Pinterest
Labels: memories, Skills I Do Not Have, swimming