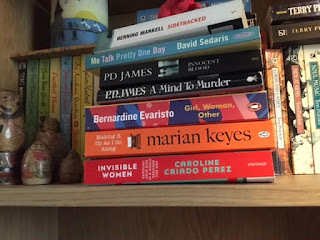 I must confess that I spent the first week or so of September staring at the books I’d started but not finished with some trepidation. Not because the contents were scary (apart from Invisible Women but I’ll come onto that) but because I was scared I might find that my inability to read had increased.

Anyway, it was Marian Keyes who broke the spell. I’m not a huge fan of her fiction but admire her talent anyway, and her non-fiction is always funny and warm. I want to be wrapped in the midst of her family, absorbing their tales with all of my ears. These slight essays and journal entries were a blast of fresh air to my dull and stultified brain.

Then I turned to Bernardine Evaristo’s Girl Woman Other. This had been on my shelf for ages and I’d been worried about cracking the front page open. Partly because of hype and my long history of not actually enjoying Booker prize winners, and partly because I was worried this would be another Queenie, which I hated (I’m sorry I’m sorry but I just couldn’t).

Anyway, I was wrong on both counts, and how. This was funny and joyful and a delight. A cast of women telling their truths, living their lives with honesty and pleasure. A medley of experiences and personalities, a jigsaw of characters that all knit together to form a picture of glorious womanhood. And JOY!

"when Yazz talks about her unusual upbringing to people, the unwordly ones expect her to be emotionally damaged from it, like how can you not be when your mum's a polyamorous lesbian and your father's a gay narcissist (as she describes him), and you were shunted between both their homes and dumped with various godparents while your parents pursued their careers?
this annoys Yazz who can't stand people saying anything negative about her parents
that's her perogative"

A friend and I went to see the play of Sarah Walters The Night Watch a year or so ago and, oh boy, the gloom. Lesbians are not allowed to be happy in fiction, it seems. Every single one was tortured and miserable, suffering in various melodramatic ways, martyred by their passions, suffering in a terribly, terribly British way.

It was so melodramatic, it was funny, but it still left a bitter taste in the mouth.

"she still straightens and dyes her hair, currently an unseemly grey at the roots, pulled back from a face that's gone slack except for a mouth that holds all her misery like a drawstring tightened around a pouch."

But. But Girl Woman Other has no time for this kind of nonsense. Joy comes off every page, is in every page. The message is that these are just women, doing their thing, being themselves, not suffering agonies for it. And I bloody LOVED it.

If you’ve avoided it so far, don’t put it off any longer, it’s the ideal tonic for these times.

And now I’ve blathered on for long enough. Criado Perez’s Invisible Woman needs a post of its own really. So diligently researched and a complete eye opener as to how women are overlooked in everything from seatbelt design to heart attack diagnosis, from mobile phone design to development of drugs actually meant to help us. It made me angry but I don’t want to end this post on that sort of note, so here’s a favourite passage from one of my favourite books of the year:

"Roland decided long ago to align himself with L'Etablissement, which is why he's a winer and a household name
among the educated classes
where it counts
Amma, on the other hand, has waited three decades before being allowed in through the front door.
although she hasn't exactly been hammering on the castle walls for the duration
in truth, girlfriend spent much of her early career slinging rocks at it"
- October 05, 2020