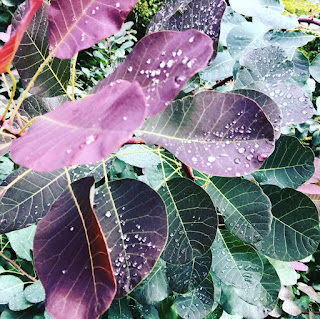 Today is the start of my very favourite month and with it, I can feel the very bones of me start to relax and my brain take a sigh of relief. October brings cooler nights, my cloud-like duvet, the click and whir of the heating in the mornings, stews and soups, nesting and resettling. I find summer quite unsettling with its exposed flesh, eyes squinting against the sun, chafing and sweating. Hurrah for October where the sun still shines but the temperature is cool. I adore it. 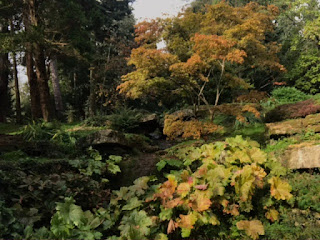 This week has been a week off for me and N, although he did have to work on Tuesday morning (endless Zoom!), so I grabbed the chance to catch up with a friend I haven't seen for over a year. We headed to this arboretum, which has the national collection of acers and Japanese maples, both trees I love, and we caught up on all the changes.

The last time we had seen each other, N & I were separated (long story), I still rented in the House of Inconvenience and the Kid lived with me. On her side, her daughter was about to get married and her long-term partner was seriously ill. Laurie was a wonderful, gentle, charming man, full of old-school manners, a passion for theatre and horse racing, and I adored him. 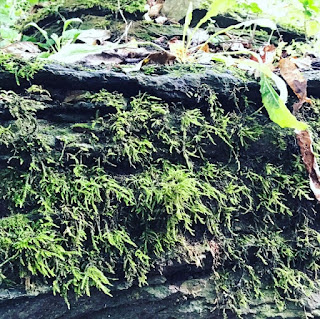 He was full of stories of a life lived to its very corners. Always open to new experiences and ways of thinking. You could sit down and have a long chat about the new Hockney works of art and end up discussing who would win in the 3.15 at Cheltenham, via diversions into who played the best Hamlet (David Tennant - which we'd actually all seen together - and Andrew Scott, in case you're wondering), the best type of soil to plant brassicas in and his experience as an evacuee.

He was the least judgemental person I have ever met.

So we walked and talked about everything under the sun, but especially about Laurie and how the lockdown has given my friend a chance to mourn him fully, without distractions and with a tenderness I hope I evoke when I die. We parted with full hearts, bellies (thank you marmalade and poppy seed cake) and, in my case, a Japanese hornbeam for the garden. Purchased at the garden centre, not just dug up and lifted off site. I haven't yet reached my Nan's level of pinching off cuttings in gardens and carrying them home in a box of wet kitchen paper, but I fear it won't be long. And even she drew the line at digging entire plants up. 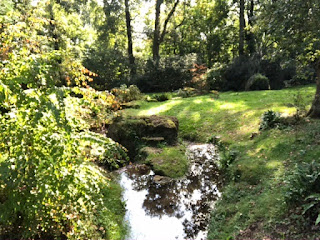 That one expedition aside, we've done very little this week and gratefully so. N cleared out the horror-show that was the shed and rearranged it so I can now get to my bike without having to step over 5 bags of different compost, shift rakes and spades to one side and then disentangle it from the hose. Pots are neatly stacked in size order and the tools form an orderly row at the end. I went in and spun round for the sheer novelty of being able to do that without being impaled on a garden cane.

Today we were supposed to be heading to Ikea but have made the decision not to. Crowds still make me panic at the moment, add into that masks and the standard Ikea-chaos, and it was just asking for trouble. So we're going to order what we want instead and spend the rest of the day pottering around the house. 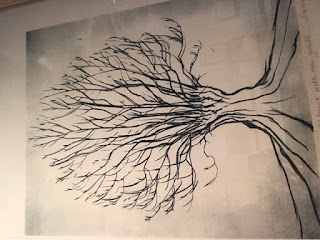 Pottering is very much the word of the week: I've painted a wall in my retreat room a dark blue which I shall sprinkle with hand-painted constellations; my sister, her daughter and my mum all came over for coffee and cake one afternoon, we took in an exhibition of drawings and etchings at the local gallery, we've visited the allotment, I made apple muffins which are absolutely perfect for this time of year and had my first CBT therapy session, which interesting.

We're watching Us, the Simpsons, Bake Off, Ghosts and football (well, N is, I'm reading on the sofa and making the right noises). I'm reading again and sink into a book every morning with a sigh of pleasure. We're eating foods that bring pleasure and drinking a red wine that demands respect. We're shifting furniture around and making cosy for the coming months.

The kitten, Mabel, is now nearly 4 months old and a long, lean kitten she is now. My morning ritual goes something like this: get up, make tea, feed her, feed Big-Cat-Thor and let him out just before she pounces him, trying to get him to play, take her back upstairs with me, into the retreat. There, once she's settled down after checking my toes are still not something she can eat, gnawing on my book/phone to see if they are edible, sniffing the plants to check they haven't become tasty overnight and knocking any pens or hairclips off the dressing table onto the floor, she settles around my neck, purring like a tiny earthquake, for a snooze while I read. As she's still housebound for another 6 weeks at least, her fur is incredibly soft: it's like wearing a silken thermal scarf. 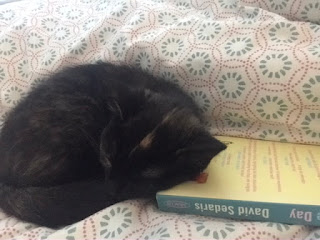 The only dark spot on her otherwise light and playful presence, is her behaviour with B-C-T. To be fair, he is a grumpy old so and so: although he's only 5, he seems to have embraced a middle-age more suited to a Dad in a 1950s sitcom. If he could smoke a pipe, wear slippers and read the Telegraph, I'm pretty sure he would. However, Mabel is more of a freewheeling, playful, hippy spirit, what's yours is mine, hooray for today, kind of personality, coupled with a wilfulness that all toddlers exhibit. Her favourite thing is to sit on the arm of a chair until he passes underneath, whereupon she leaps, all 4 legs spreadeagled, onto his back, causing him to race around, growling and spitting, with her clinging on like a rodeo girl. Once he manages to shake her, there are a few minutes of feverish fighting before he manages to break free and make an escape.

We're hoping time and neutering will calm her down with him, but if you have any tips, let me know. Heaven knows, I can't be supervising their behaviours all the time. 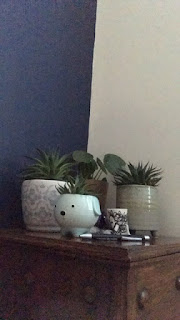 This evening, I'm off to a friend's house for dinner. We scored a perfect Bunty hit in a charity shop a few weeks ago, spotting 10, original, 1960-70s Bunty's in damn good condition for £3, so tonight we'll sort through them, eat roast chicken, drink some wine and indulge in a good old gossip. We are both full of plans for things we'd like to start up, including a local group for peri, full and post menopausal women in the area. She is just post and I, with my hysterectomy planned for next year, will be thrown full on into it before too long. Until the question of the hysterectomy came up, I hadn't given my fertility another thought: I'd had the Kid and was happy at that. Once it did though, I found myself questioning absolutely everything about myself, the very fundamental core of myself and feeling almost bereaved. It was very odd.

Anyway, a leaflet entitled "So, You're Past It" or "What is the Point of You Now?" handed out by doctors doesn't really cut it in the information/support stakes, so we're thinking of setting up our own. And a podcast where she demonstrates her considerable knowledge of history and I play the one who says "ooooh, really?" a lot. And and and.

So many plans, so little time. Or rather, given that a growing time obsession was one of my "I think I'm going mad" triggers, enough time. If you really want to do something and its the right fit for you, it'll happen. Breathe, look at the trees, take it slow.