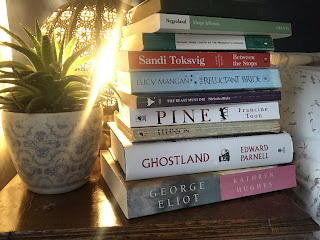 As I wrote this, the rain is fairly throwing itself at the windows so I’ve made the most of it being a weekend by not getting up. Mabel is at the foot of the bed, ostensibly sleeping but really on the alert for a twitching toe under the duvet - up there as one of her top 10 favourite things to attack.

I finished reading Pride and Prejudice last night and enjoyed it far more than I remember enjoying it last time I opened the pages. And even more than the last time, I can hear the actors from the rightly-lauded BBC version speaking the words, especially Benjamin Whitrow and Alison Steadman, who's Mrs Bennett shriek had not yet been wheeled out so often as to become tiresome.

By the way, did anyone realise that Jennifer Ehle is American? I only found out a couple of weeks ago. Mind. Blown.

My copy of P&P was the school copy of a former colleague of mine. Jude was one of those people whose intellect was so enormous, I thought the effort of finding words in her huge mind dictionary, that it showed her speech. If not in a hurry, it could be fascinating to watch her form long, erudite sentences. If you were in a hurry though...

Anyway, I was fond of her and we worked together for many year. Jude did only a few short months into her retirement, which is cruel of fate. I do think of her around this time of year, so it’s nice opening the pages and finding little notes in the margins. On one there is the word JAM in pencilled caps. I don’t know if it was a comment on the particularly complex sentence above, or if she had genuinely run out of jam, so wrote a quick reminder.

Sandi Toksvig made me laugh out loud and was filled with a warmth that envelopes you as you read it. And some sharp thinking on society, intermingled with touching family reminiscences and cracking celebrity anecdotes.

Ghostland is a satisfying canter through ghost stories and films. Pine was a proper gothic horror that made the hairs on the back of my neck stand up, which is what it should do. Loved the depiction of children on the brink of growing up and away from the places and people they love too.

Poor George Eliot, forever doomed to be thought plain, if not outright ugly, to have been overshadowed by Dickens despite being more widely read, to have been, to have been so insecure in her lifetime.

Negroland is worth all the superlatives laden upon it as Margot Jefferson detailed her childhood, the blurred boundaries faced by the prosperous Black community in Chicago. Going to a mainly white “good” school but facing minor aggressions, thoughtlessness and outright racism, she found herself trapped between 2 worlds. Her mother sounds wonderful - a fabulous character. Jefferson is particularly good on the strain faced by Black women who cannot, for an instant, admit to any weakness, who have to be strong, who have to carry on regardless of their own tiredness.

"Civil rights. The New Left. Black Power. Feminism. Gay rights. To be remade so many times in one generation is surely a blessing.
So I won't trap myself into quantifying which matters more, race, or gender, or class. Race, gender and class are basic elements of one's living. Basic as utensils and clothing, always in use; always needing repairs and updates. Basic as body and health, justice and reason, passion and emancipation. So the question isn't "what matter's most?," it's "How does each matter?" Gender, race, class; class, race, gender - your three in one and one in three."
- November 30, 2020