October at the Allotment

To paraphrase Snoopy and his novel's opening line, it was a dark and stormy October. Well, not all of it was, but a great deal of it and conversations at home went something like this.
"I'm off to the allotment."
"Really? I'm sure it's going to rain."
"Nah, my weather app says it's good. See you later."
...
30 minutes and heavens opening later
...
"You're back then. Enjoy the allotment?"
"Shut up." exit stage left, squelching, to change clothes. I did manage to harvest the 3 Kabocha squash that had survived (all my pretty little patty pans had rotted) and they are now safe in the utility room awaiting their fate as risotto, soup, cake, stew and fritters. They are a gloriously grumpy shade of green, the sort of green that's resentful of the other brighter greens around it, with bumpy tough skins. Inside, the flesh is a glorious orange, the middle chock full of seeds that I've carefully rinsed and saved. There's one roasting in the oven behind me right now, getting ready for a monster risotto-making session. 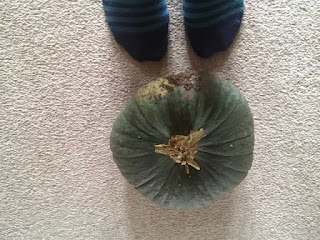 Would you look at the size of this absolute unit?
Not the biggest squash I've seen but one I can at least eat, rather than turn into a small house.
The brassica cage took a battering on more than one occasion. Each time I went up it needed the netting securing or the canes replacing/refirming. It is not, and the constructor of it (not me) acknowledges this, the best brassica cage in the world, far too flimsy and complicated, but it has done a fine job of keeping the butterflies off. There is at least one baby cabbage snug in it's nest of leaves. I have 12 more seedlings at home that are hardening off. As soon as a decent cage is constructed, they can go up. A bit late but may as well see what they can do.
My folks came over and helped us with the fallen tree clearance. 2 of the 3 elders at the canal bank end of the plot had come down some time ago but the tree surgeon the council employ had proved to be mythical, so my Dad brought his chainsaw and we set to work, spurred on by the thought of the coffee and bacon sandwiches in the rucksacks. 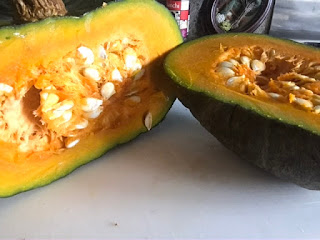 Inside the Kabocha. Would ya look at that orange!
The 3rd elder is still standing but minus all bar 2 of it's branches. Elder are a bit unstable frankly and as 2 had gone, I'd decided to rid myself of the 3rd while a man with the right bit of kit was there. Unfortunately the man without the right bit of kit kicked up an almighty fuss about the destruction of a "perfectly good tree" and a proper domestic ensued. Ended when I capped my argument with "mo' digging, mo' opinions".
Essentially, do some more work up here and you get to dictate what happens. 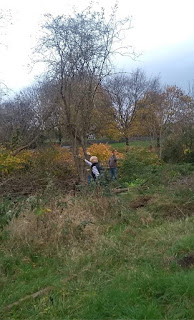 My folks, doing what they do best and have been doing for years.
Quite took me back to my childhood.
All that aside, there is now a large pile of elder logs forming an excellent habitat for bugs and hedgehogs over the winter. Bonfires are still banned on the plots, so it'll be staying there for quite a while. To be honest, there is so much bug life on the plot that it won't take long for the greater part of it to rot down, as I've seen with The Pile, made up from the barrow-fuls of grass and weeds that I'd put in a heap at the bottom. Once about 4 foot tall it has, within the space of a few months, settled down to just under half of the original size.
This month I'll be putting up stage one of the fruit cage and planting in some rhubarb as well as the rest of the brassicas.
I'm so grateful for this space, even in the dark days of late autumn. Just to have somewhere to sit and be is a huge benefit. And it has come back to me that planting is an act of hope. Every time you drop a seed or a plant into the ground, you're hoping that the conditions will be right, the world will not have ended and the seasonal cycle will once more bring you back round to pumpkin time.
- November 05, 2020