I have to go in to the office yesterday, so decided to take a route that I haven't done in a long time. It adds another 20 minutes to my walk and when your feets are misbehaving, you don't walk longer than necessary. Certainly not on tarmacked pavements.
But sod it. Life can’t always be about the shortest routes. So I diverted along the canal.
The day started off quite sodden. Heavy rains on waking, drizzle on walking, sulky moody clouds throughout. I prefer a cold frosty day, or a misty one, but these are also good. They certainly mean I have the tow path to myself. The air smells of wet earth, mouldering leaves, the muddy water in the canal: its a smell I find quite appealing.
A young girl kayaks past with an expression of fierce concentration. Or fierce loathing. It's hard to tell with teenagers. Her long hair is tied into a thick yellow plait that hangs from under her beanie and down one shoulder. 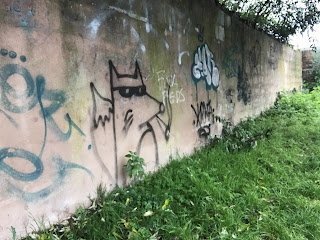 So I walked on. Past the coolest urban fox in the city who was fully unimpressed by my sexy cagoule. Past the new graffiti that proclaimed “James, stop asking questions, we are too busy”. Which prompts the questions: who is James, who is busy, what are they busy doing?
Poor James. Doomed to eternal ignorance for want of 5 minutes explanation.
I go under a bridge, over a bridge, past the bus depot where the blue painted corrugated iron is decaying even further. It looks like the paint is desperately trying to escape the rust, and water is cascading down from a broken pipe. The ground underneath is saturated, excess water running off into the canal. Not even the coolest goth band would want to stand in front of it for their album cover shot now.
Over another bridge and the aspect opens out to reveal the lock ahead of me. I find locks a little frightening. That tight narrow space, those dank and dripping walls, the threat of that weight of water just held back by the wooden gates that look none too sturdy. I’ve never actually been in one. If I ever get that canal boat I dream of, it’ll have to be a static one because I’m not dealing with locks. 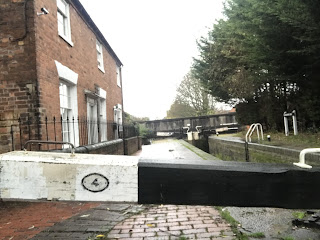 But I do love the former lock keepers cottages. They are tiny and wee and impossibly quaint. Lock keeping always seems like an idyllic lost occupation to me (despite the locks themselves): like spinning or treading  grapes.
One of the cottages had this lovely  growing thing climbing over its wall. I don't know what it is, but I like how it looks against the bricks, the flowers reaching down as though to say hello 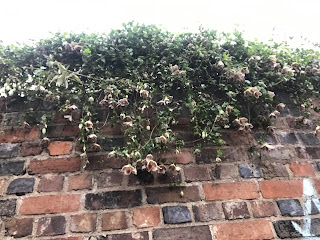 I walk down under yet another bridge, using the raised bricks in the path to stop me slipping down to an ungainly water stop. I’m guessing these were first set in to help barge horses up the slippery slope but that might just be my fancy.
Round the corner and there’s my favourite willow tree in the city. During the spring, its branches develop a light green haze that grow into full blown tresses of the most sumptuous green. From a distance it looks like a shaggy emerald bear. 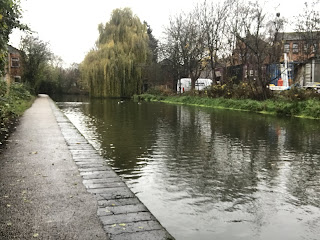 On the right side of the canal is busy industry: small businesses revving up for their day under this half-hearted, half-assed lockdown. I can hear voices shouting, cars and vans moving about, doors slamming. I pay as much attention to the noise as the few straggly ducks floating listlessly about do. It's that side of the canal, so it's nothing to do with us. The wrong side of the water, so to speak.
Instead I pass the willow, round the corner and encounter Theo, a Good Boy, by the museum (not my museum). Theo is 8 years old, and a hefty Good Boy, soggy from rolling on the wet park grass, and a lover of leaning. After 5 minutes of leaning against my legs while I chat to his owner who's bemoaning the cafe not being open, he moves away to check my legs are now thoroughly Theo'd. Deciding they're not, he shakes the last droplets over me and lets me move on. 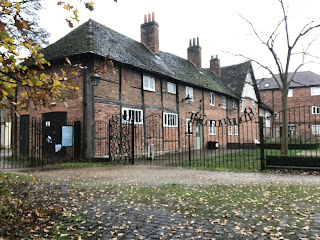 Just a few steps now, they take me round the side of the building, over the cobbles to the front and out. A man passes with 2 labradoodles, crazed out of their tiny minds with joy at being off the lead. They bound off down the tow path and I hear Theo barking them off his patch.
And now, the rest of my way involves a 4 lane dual carriageway crossing and a stroll past the dark and gloomy Vue before I reach my place of work. If I were you, I'd keep going down the canal till it reaches the river. I used to go that way to meet N when we were dating. It's a nice route. Don't forget to stop at the barge cafe for a bacon sandwich.
It's good to get outside.
- November 26, 2020

Email ThisBlogThis!Share to TwitterShare to FacebookShare to Pinterest
Labels: along the canal., autumn, walking

The Bluest of Skies, the Leekiest of Leeks

Time at the allotment has been somewhat lacking recently. Work work work, socialising, weather. They've all conspired to keep me stuck i... 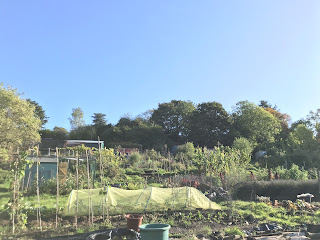