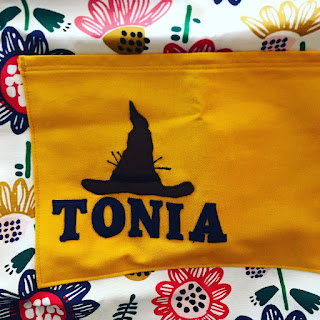 I’m sure I’m not the person who came up with this term but I can’t remember who did. Whoever they were, full genius marks to them as this is the perfect word to describe this period between the tired damp fag end of this year and the bright shiny start of next.

Ordinarily, I’d be spending it clearing out cupboards, catching up with friends and family, taking long walks and generally filling my hours with activity. This year, recuperation means I can’t. I’m forbidden to lift anything heavier than a quarter full kettle, banned from all housework and under orders not to get cocky about the speed of recovery.

Truth be told, this chafes a little bit, until I stretch too far and then the wound site chafes even more than my forced inactivity, and then I give in and have a doze on the sofa.

Christmas dinner was a triumph, cooked by N - his first ever time of doing so. Yes, it was 2 hours late and we forgot the crackers, but there was no rush. These are the long slow days of not very much at all this year. I'm rarely properly up before 10 and he, with his infinite capacity for sleeping in, can get a good 12 hours before he wakes.

It made me weep the morning after I'd come home when he appeared at the spare bedroom door (where I'm sleeping currently for maximum comfort) just as I was trying to struggle upright. He'd set his alarm so he could be ready with a cup of tea for me. That is consideration.

Yesterday we had snow, as did many places. There is still something magical about this white stuff whirling down and covering everything, making it clean and bright. The cats were perplexed by their first encounter with it, although Mabel did decide to enjoy it after her initial jump back in surprise. Today, when more fell, she leapt into the air, batting it with her paws and generally acting like I wish I could have done. 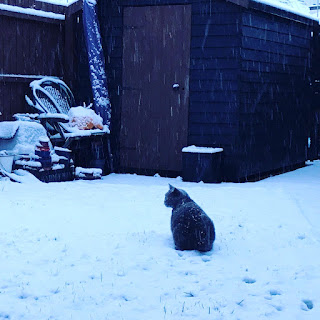 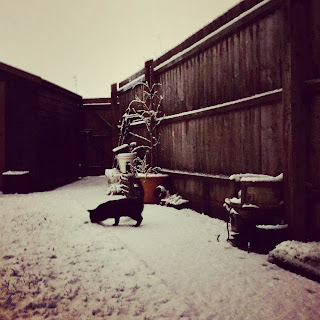 A friend of ours with a recent negative Covid test came over for a game of Trivial Pursuit, some damson gin and a lot of cheese. It brought a lovely dose of new energy and conversation to the house. Her present to me this year was a handmade apron with a fab print and a Granny Weatherwax hat on the pocket. It may have been the residual anaesthetic, but I was incredibly touched and a little weepy with it. GW is a heroine of mine and the most perfectly realised female character ever written by a man. That she'd remembered that and got it worked into a handmade gift was a truly generous thing.

Apart from getting weepy over an infinite number of things (Mabel giving me a headbutt, Thor bringing me a gift of wool from my stash, N tweaking my toes as he walks past, the end of Ghosts, episodes of The Repair Shop), what have I been doing with myself?

When I was little, this betwixtmas time would have been spent in much the same way (minus the yoga and sourdough, plus arguing with my sister), with the excitement of New Years Eve growing every day. For NYE was when we were sent off to stay with my maternal grandparents. We'd arrive in the afternoon so we had time for the usual rituals: visiting the tiny graveyard, playing Poohsticks from the bridge over the stream, exploring the small church that we never tired of, feeding the ducks in the farm pond across the road from their house.

Dinner would be early and we'd be allowed to stay up, trying small nips of things from the leatherette-clad bar in the corner of their living room - advocaat is my Proustian madeleine - watching Clive James being incredibly erudite and witty as the clocks chimed 12 and we chomped a supper of biscuits and cheese.

The next day would be our second Christmas as they were always elsewhere for the official one. Our parents would arrive, heroically hiding hangovers, a huge joint of beef would be roasted and there would be presents, crackers, squabbling and people trying to politely refuse the homemade wine my Grandad devoted hours to making but that always tasted like vinegar at best.

I was lucky with my childhood Christmasses and the hardest lesson with growing up is that these can never come again. Both grandparents are dead, to begin with, second Christmas is a distant memory and besides, the wench is middle aged. This does not make me sad or melancholy though: this year, as I turn these memories over, I am just grateful for all the ones I've had and all the ones I hopefully have to come.

All things considered, I'm having a pretty good end to a year that's been a test for all of us. There was no right or wrong way of passing this test - it is enough to have endured it. I'm impatient for recovery, for the new year, for change, as are so many, but I'll step carefully over 2020, rather than my usual full headlong pelt forwards. And I'll raise a glass to all of it.