December has landed with a squelch today with the rain falling steadily since the early hours and showing no sign of letting up. I made my final dash for some Christmas shopping during my lunchbreak and came back with an additional pile of books to see me through to January. Possibly even February, who knows. 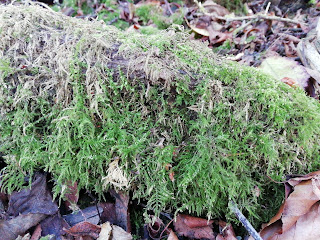 It does mean that a corner of my bedroom now smells like an old bookshop, which frankly, if it was sold in a cologne, I'd buy.

And with that so-neat-you-nearly-didn't-see-it segue, here is my week of smells...

A booze-laden Christmas cake, made by my Mum. Covered with a decent coating of marzipan and a layer of icing so thick, it makes your gums tingle. The smell of the fruit, the brandy and the almonds is almost too good to resist (in fact, it hasn't been resisted...)

Scented candles from my son's new start up. I'm burning Mocha in the bedroom, Toffee Apple in the bathroom and Roast Pumpkin in the living room. They smell amazing all the way down to the bottom.

New pyjamas, freshly washed and folded away with bits of lavender between them. I go for surgery on the 22nd December and want decent, cosy pyjamas to while away my January from the bed as I recover.

Mabel's fur after she'd been out on a cold and frosty morning. I am slightly obsessed.

Leaf mould, moss and turned earth at the allotment. I'm in full on rush mode as I try to get everything done before I have to self-isolate.

That wonderful fresh fruit and veg smell from a nearby farmshop. I love it there and this was probably my last visit before I have to self-isolate. It smells so much better than supermarkets with their pumped in "fresh" bread smell.

Basil, chopped and scattered into the tomato sauce on my homemade pizza. A blast of summer to the nose.