November at the Allotment

It's weird writing about my last 4 weeks at the allotment because, as from today, I won't be up there until mid-January, February if I'm really unlucky. And as for actually being fit enough to achieve anything, well. Let's just say that chair yoga can only do so much for your digging muscles.
But enough bleak imaginings of the future state of things. I did actually manage to achieve quite a bit in autumn. N treated me to a "swoe" after my allotment neighbour watched me hacking away with my old hoe for 10 minutes before handing me his swoe, saying "please try this, its just painful to watch you". Never underestimate the power of poor hacking when it comes to getting plot pals to lend you effective tools.
Anyway, can I just say that the swoe is my very very very favourite new tool to play with? A stainless steel, double-edged blade that you slide forward under the weeds, pull back and hey presto, weeds 0: you 100. I LOVE it and it repaid my love by making short work of many weeds, especially in the fruit cage area.
Which was just in time for the grand erecting of the cage. Accompanied by many a rude word as N wrestled to get the poles in the Y-joiners (Y join? Because this big mallet says so). When I went up the next day to attach the mesh, it was still standing. Thank god, because I can just imagine the furious words that would have been spoken if it hadn't been. 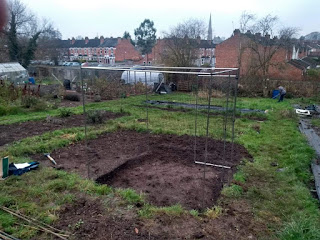 And there had been plenty enough of that when we were trying to level the ground for the cage to sit on armed with 2 shovels and a spirit level designed more for the hanging of pictures than the levelling of topsoil. As you can see above, I now have a heap of soil I was planning to shift back into the cage to tamp down and plant the raspberries in. Sadly, rain and work have stopped play. It ain't happening now. But I have learned that most things are recoverable or catch-up-able with at some point, so I'm making myself Not Worry about it.
Besides, it's so wet up on the plot, all I'd end up with is some sad raspberries, a piece of ground that looks like the Somme and an extra 6 inches in height from the mud stuck to the bottom of my boots. Let it go, Collett, let it go. 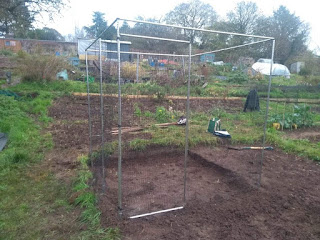 Behind the cage you can see the formerly grassy knoll which I'd spent some time clearing and then reinforcing along the path edge in October. The plan is to terrace them eventually but not for a while yet. Rhubarb has arrived and been planted in one of the beds I grew the courgettes in earlier this year. I will not be wanting quite so many in 2021, so the 'barb can have the space instead.
November was also the month of the Great 'Gras Bed Experiment. As I've already said, somewhere on this blog, I'd spotted asparagus ferns in this space (a great big long bed, practically the width of the plot, about 2/3rds  of the way down) but the whole area was so choked with weeds and grass, I couldn't be sure. Nothing to be done but to put down some membrane and wait.
It was down for about 8 weeks in total, and the last week of November saw me lifting the cover and starting to fork the earth over. It shifted easily but I soon started uncovering some rather disturbing looking growths, like long brown wizened fingers coming up from under the earth. 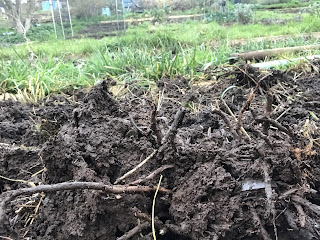 Freaked out yet? I was, slightly, until the penny dropped. Yes, these were asparagus roots! A quick google confirmed it. And the fact that you're not supposed to disturb them. Bugger. I quickly covered the back over and moved delicately over the rest of the bed, managing to clear the dead weeds from the surface of about half of it. Keep your fingers crossed for 'gras please.
Remarkably, some of the wild flower and anemone seeds I'd planted were still throwing out flowers right up to the end of November. It's extraordinary how mild it's been - there is even the occasional bee, looking bewildered and even more bumbling than usual. 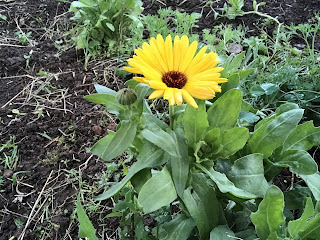 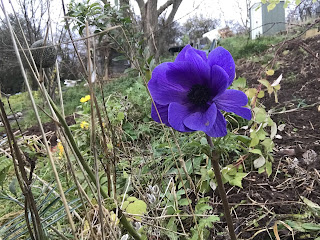 And that's me done there for the year. I'm trying not to fret about having to leave the plot for so long and, no doubt, after the op, I'll be too busy recovering to worry about it. But I shall miss this place, nonetheless. It has given me such pleasure and solace over lockdown. A place to breathe properly, to get some peace and space. It'll still be there, waiting for me, when I can get to it though. Bindweed and all.
- December 08, 2020