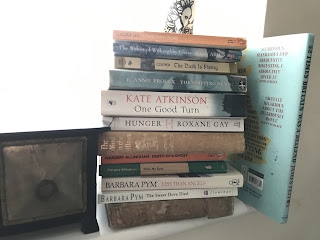 Wow, December was a booky month! I honestly didn’t expect to read so much, given my hospital stay and the lack of concentration that always follows an anaesthetic.

There was a lack of concentration but I channelled that into some children’s books, feeling the urge to spend time with Mole and Ratty (Badger is my absolute favourite character), Sylvia and Bonnie. I also felt it was time to find out what all the fuss was about with the Dark is Rising. If you’ve missed the fuss, this episode of Backlisted should explain it.

Laurie Lee was a hefty dose of that dangerous thing, nostalgia, Sense and Sensibility a delight, One Good Turn a bit of a slog (why was Jackson such a wuss with bloody awful Julia?) and Allingham is quickly becoming my favourite crime writer.

It was a joy to find 2 previously unread Pyms in the charity shop. Less Than Angels was excellent but The Sweet Dove Died a bit of a stinker as she’d obviously tried to bring her characters up to date. It didn’t work. Still, I’d rather read a mediocre Pym than a top Rushdie.

52 Ways... was one of those stocking filler books (given to N by his brother) that actually has a decent point to put across (namely that bad things were done and buried by Britain’s empire) that got lost because the author fell in love with the word bellend, using it multiple times on a page. Listen, I swear like a trooper but it was tiresome even for me.

But I want to focus on Roxane Gay’s Hunger. Such a powerful book. A meditation on her weight and the horrifying reason behind her rapid increase into obesity. That one act of male violence should derail a person is not a new occurrence. That the long-term, damaging effects should be so eloquently discussed is.

Having spent large chunks of my life as a big woman myself, I know that the journey to becoming big is a long one and often triggered by something else. A deep unhappiness, a traumatic event: something, somehow, has made you so fearful, so sad, that the only respite is food and we kid ourselves with every mouthful that food is our friend and food will keep us safe.

This doesn't mean we are lazy or stupid or ignorant of good eating. We can make the right food choices, do the exercise, but something will send us into corners where we can't be observed as we eat the very things we've told our children are bad for them. We know it. We know how we look. And we are all too aware of how we are judged for it.

"I am self-conscious beyond measure. I am intensely and constantly preoccupied with my body in the world because I know what people think and what they see when they look at me. I know I am breaking the unspoken rules of what a woman should look like."

Those unspoken rules! We're never free of them, not even when we lose the weight. It's never enough until it's too much. You can do all the exercise but that will make your thighs fat, not strong, in the eye of the world. You can cut out all the refined sugar but then someone will tell you that it's pointless unless you replace it with kale. Billions of pounds (money not fat) are invested in telling you that no matter what you do, it's wrong and only they have the answer.

Except they don't have the answer because then how would they make their money? Diet culture is failure culture. If they find a cure, it will wipe them out and no be-yachted chief exec wants that.

And their "answers" are predicated around the idea of control. Control this amount of bread, this amount of sugar. Eat this many syns, don't eat over that number of points. Make this smoothie, don't eat that solid food.

"...the woman who clearly did not need to be there because she was no more than forty or so pounds overweight, dominated the session, asking intimate, personal questions that broke my heart. As she interrogated the doctors, her husband sat next to her, smirking. It became clear why she was there. It was all about him and how he saw her body."

And it's bullshit culture because it never even touches the root of why we might be overeating. There is not a diet in the world that gets you alone with a therapist, who does not judge, but who simply says "there is nothing wrong with you, nothing can hurt you now. I understand. Tell me." Yes, groups can be supportive but there was no way I am ever going to stand up in a Slimming World "Body Magic" session and tell my truth.

I have said this time and time again, to doctors who smirk and think I'm being melodramatic, to thin friends who cannot understand because this is an experience they will never have, and to anyone who dares to use the words "fat and lazy" in my hearing: until we treat obesity as an eating disorder, we will never treat it properly.

And it breaks my heart to know that.

"To tell you the story of my body is to tell you about shame - being ashamed of how I look, ashamed of my weakness, the shame of knowing it is in my power to change my body and yet, year after year, not changing it. Or I try, I do. I eat right, I work out. My body becomes smaller and starts to feel more like mine and not a cage of flesh I carry with me. That's when I feel a new kind of panic because I am seen in a different way. ... In such moments, I see myself in the mirror, narrower, more angular. I recognize the me I could have, should have, would have been and want to be. That version of myself is terrifying and maybe even beautiful, so I panic...I stop...I do this until I feel safe again."