This is the first morning I've woken up feeling even vaguely human and not covered in a thin film of sweat that made me want to scrape my own skin off.

Yes, last Tuesday the universe looked at how my recovery was going and decided to throw an infection in to see how I reacted. That morning I'd woken up and thought "well, that's a bit odd" as I scrabbled from under suddenly oppressive covers and felt the room ever so slightly tilt on it's axis. Being me, I shrugged this off with a couple of paracetamol and got on with my big plans for the day, i.e. moved from the bed to the sofa, via the kettle.

By mid afternoon my temperature was spiking around 37.7 (that's Celsius for all you non-metric fans) and I was shivering under 2 blankets on said sofa (a piece of furniture I'm really growing to detest as I spend so much time on it and it begins to feel more like a prison). Wednesday, I caved and phoned the doctors, who promptly sent me to hospital for tests and, 4 hours later, confirmed that it was indeed an infection, go home and take these mega anti-biotics.

Since then I've done little apart from lying upon the detestable sofa, watching reruns of Poirot and Miss Marple, feeling my brain atrophy between hot flushes. I tell a lie, I did spend an hour one morning weeping gently because I couldn't find the new jar of peanut butter. When I finally did, hidden behind a jar of jam, I spent another 10 minutes weeping gently in relief. That is the level my brain is at right now.

Reading is right out. I've managed The Dark is Rising, The Living Mountain and The Box of Delights, but anything else is beyond me. A friend dropped round some books and I'd ordered myself Ring the Hill, but I can only manage a page or two at most before going back to doom scrolling or sleeping.

N's refrain this winter has been "you are ILL, will you please behave like you're ill". This is the first time in years when I've been afforded that luxury and it's been a massive relearning. That there is someone else in the house who can do the hoovering, cooking, emptying of bins, get the shopping in, rather than a minor whom I'm supposed to be looking after...well, it's taken some adjusting to.

The plus side, apart from arms made colourful by various attempts to draw blood from my stone-like veins, is that the world feels very distant and news isn't sending me into a tailspin. I wonder if this is how alien life (if it exists) feels, looking down on us? "Would you look at what those stupid people are up now? Good grief, it's chaos down there!" "Yes yes Xerbaital5, humans are crazy like goital fish, now, put down those knurd-glasses and come to the table, your frimpt is getting rubbery."

All that being said, the situation over those preposterous and pathetic “free” school lunches which amounts to nothing short of a scandal. If you’re as angry as me about it, you can donate to Fareshare (https://fareshare.org.uk/) an organisation most definitely not lining its own pockets.

I am quite proud that, despite all of this, I have manage to stick to my pledge of no-gluten. Well, mostly. But honestly, if you're going to leave a tube of Pringles out right near where I could stumble and, reaching out to save myself from a fall, find my hand wedged into the tube and coming out clutching several that then, due to the motion of the stumble, find their way into my mouth, what do you expect?

And yes, Pringles are covered, covered I tell you, in wheat flour. Which seems especially cruel of the makers. A surprising amount of stuff is.

And through all this, I'd love to tell you that Mabel has been a constant, purring presence by my side, keeping me company and generally being a lap cat. But this is Mabel and lap cat she is not. I get 5 minutes purring, nudging attention in bed in the morning, and then she's off out exploring. Or chasing off the persistent tabby that comes into the garden. Or launching ambushes on Big Old Thor. Or sitting on the fence, like a furry watchful guardian, monitoring the comings and goings of our neighbours. She's even taken to leaping up the fence when she hears R next door coming along his garden path, so she can meow down at him.

I'm not sure R likes this as he never says hello to her. Thor certainly doesn't and will rush out when he sees her up there, uttering his strange hoarse croak that's supposed to be a meow, telling her off for her daring.

As you can tell by the length of this nothing-in-particular post, I am now feeling much better. After a few days of feeling really ill, a few more of being at the Laurie Lee level of melodramatically-ill,  I now feel human again. Lee was a master of sickroom melodrama, well into his old age and there's an hilarious passage in Cider with Rosie where he imagines the celebrations in the street at his recovery.

I've managed a short walk outside this week. The clouds were a bobbly blanket across the sky and reflected in the water, the air felt sharp and damp, and it was just good to be outside. N was distinctly uninspired by the murky canal, lowering grey skies, bare branches and sloppy paths. "It just all looks dead." It's not dead at all, of course - as I pedantically told him. It's all just waiting for the right moment to start the business of life again.

There's a metaphor in there somewhere, if only I could scramble the brain cells together to find it. 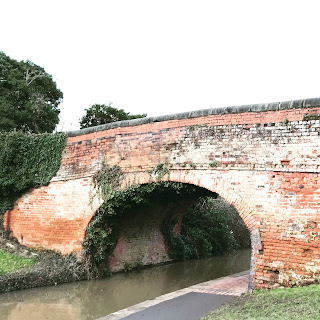 This is quite my favourite bridge over the canal - I love the brickwork for some
reason - and the end point of yesterday's walk.
- January 13, 2021