I was pleasantly surprised by how much I managed to read in January. Immediately post-op, in December, I was fine and ploughing through, if at a slightly slower pace. Come the first week in January, an infection set in and scattered my concentration like so many marbles. Nothing written would stick.
It took me a week to get through The Box of Delights, something that would normally only take me a day. The Living Mountain was even worse, all that lovely lyrical prose... I’d manage a sentence and then put it down in preference for staring, glassy eyed, at the wall.
I'd treated myself to Ring the Hill after enjoying Cox's 21st Century Yokel, and which proved to be a wandering, strange and oddly compelling as that. I do like the way he fits himself into a landscape, actively seeking it out regardless of the challenges. Once my health began to return, I tore through it.
"A hill is not a mountain. You climb it for you, then you put it quietly inside you, in a cupboard marked 'Quite A Lot Of Hills' where it makes its infinitesimal mark on who you are."
But what really kicked my reading arse into gear was the ever reliable Pym. Some Tame Gazelle was the first I read of hers, decades ago, and returning to it was like returning to an old friend, one who made no judgement but allowed you to find your feet again.
That was enough to send me back to The Living Mountain which is almost an antithesis of all those men-and-mountain books around. I could amost feel the snow against my face as I read it - just wonderful. A friend lent me the 3 Monica Dickens books, tales of her times as a junior report, cook and trainee nurse, which were hilarious and eye opening.
Mudlarking finished the month with Laura Maiklem's ode to the Thames and the treasures she's found on its shore. A museum person to the core, I can think of nothing nicer than getting to see her own mudlarking museum, a richness of finds, the lost and thrown away of lives stretching all the way back to the Romans. 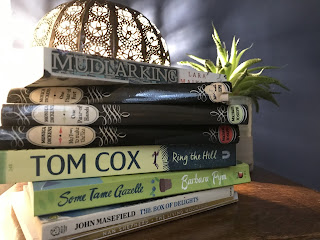 Right now, I have Diary of a Disappointed Man and Homecoming on the go, not to mention Claudia Roden's Book of Jewish Food, which is fascinating. I think I'm almost back to normal, but I'm still hugely distracted by anything that doesn't require much concentration. One sentence at a time, eh?

And at least I'm not having to force my way through a Philippa Gregory like my friend is (she does not give up on books she doesn't like and is growing gradually more annoyed). So tell me, what are you reading right now?