It is hard to resist spring, for all it's wild and woolly weather, waking up to snow flurries, winds to take your ears off and glowering skies, only to have it completely change within the hour. That first glimmering of weak sunshine appears to apologise for it's lateness before getting onto the serious business of warming your bones. 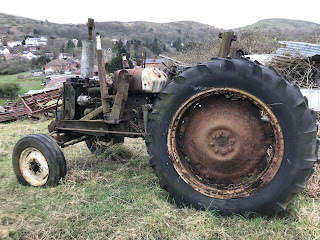 Easter Monday, I and 4 friends set off for a walk in the Malverns, a little known area of it, judging by the few people we saw. I had expected hoardes of them, maddened by incessecant insiding, squabbling and puffing their way along the ridge, but my friends are wiser than me, and in charge of the route, so we made our way downhill from the northern side of the town, through a farmyard where the tractor appreciators among us (me and 2 others - I'm not the only weirdo) were in seventh heaven. Plus there were lambs and gambolling to witness. Is there anything more cheering to the eye than lambs, wobbly on their legs, leaping at each other? 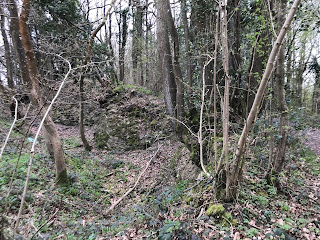 This was, by a long shot, the longest walk I have undertaken for at least 2 years, but determination and cabin fever will carry you a long way. We set off in snow that was whipped into tiny frenzies by a wind that clearly had a grduge against something. The copse was a welcome relief from it, even if it did rattle the tree branches furiously: they sounded like bones outside a witch doctor's, clacking together in a gale. 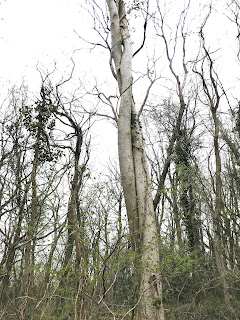 There were loved-up trees that had twisted together in unbreakable embrace, snakey roots to trip the unwary. No bluebells (too early) but wood anenomes and violets in carpets, and the smell of wild garlic hanging around like an open air deli. We didn't pick any. Instagram feeds are full enough of wild garlic pesto - they don't need me adding my 2 penn'orth. 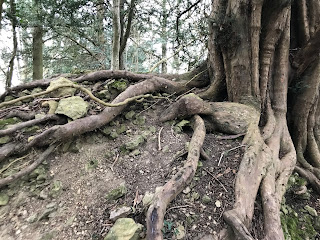 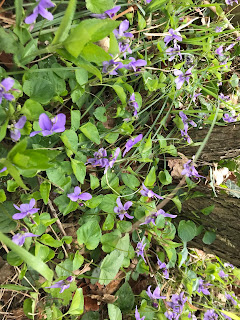 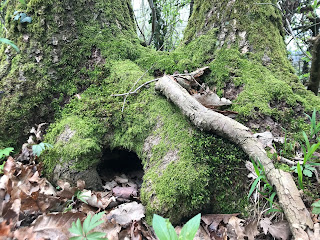 I liked the tiny mossy bolt hole under this tree and instantly wished I could live in it. Or at least write about the tiny person living in it. She would be called Minnow Brown and have wrens for friends. This is a story that first cropped up when my son was small and I wanted to tell him stories. Given that he's now 22 and I've still not written a word, I think Minnow Brown may have to remain in our imaginations. Which is probably for the best. 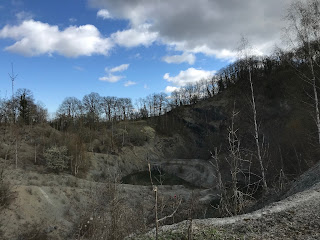 By the time we reached the quarry, the skies had completely cleared and the sun was making up for lost time. The wind stayed and when we stopped for shelter and lunch (and to look for fossils), it rattled the bones-branches even more furiously. 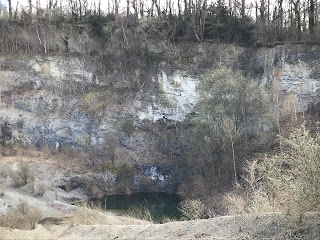 Apparently, this quarry has been rigoursly plundered for fossils over the years. The Earth Heritage Trust maintain it now. I loved the layers of the rocks in the quarry walls above the lake (sadly small - there has not been enough rain, even if it feels like there has), each delicately resting above the next, subtly shaded differently. This is, according to geologists, stratification, but I think it looks like the layers of a piece of delicate French patisserie.

I may have been ready for my sandwiches at this point. 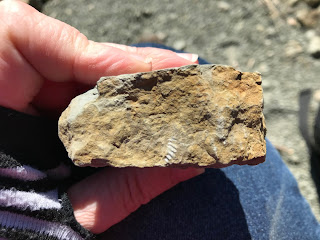 Not so ready that I couldn't join in with turning over rocks to see what there was in them. To be honest, I don't need to be in a fossil quarry to do that, I can lose hours looking over gravel or at the stones I turn up at the allotment. Geology and fossils are fascinating, so this was like being in a candy shop. We found mostly traces of tiny sea creatures, or rhynchonellida brachiopod, if you're feeling fancy. I brought just 2 home and they are now with the rest of my small collection. One day I shall catalogue them and then I shall really have gone over to the dark side. 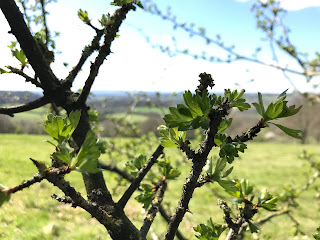 Everywhere were signs of green and new growth. Tiny leaves on trees, distant hills wearing a gauzy cloak of green over their brown winter pelt, blossom petals drifting down. It is most cheering after this winter. As was the glow of satisfaction at having made it so far without legs buckling. It is good to be active again. 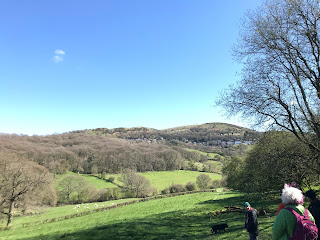 That said, the above was taken when we lost the path, my feet were complaining and I really really needed a wee but don't like wild weeing. It's amazing how grumpy a previously sunny tempered, entirely amenable person can get in that situation. Imagine how bad I was then.

Heading back to the cars, we passed fancy drains, fancy landscaping and fancy outside art. 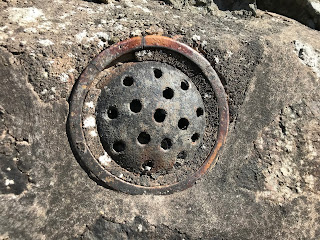 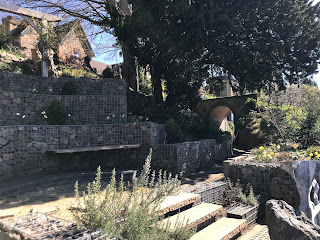 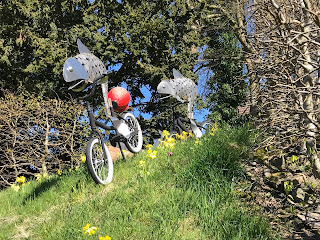 I have never stumbled more gratefully into a Waitrose loo than I did that day.

Of course, across the land, things reopened yesterday but we failed to jump into action at the calls to spend spend spend to save the economy. I did go to a garden centre at the weekend, and that will do me. Despite being half vaccinated - people can talk to my left side only - I'm reluctant to throw myself into crowded situations, but that's me on a normal day, let alone Right Now. My natural reluctance to be jostled in stores has stood me in good stead so far, I see no reason to change it for the moment.

That said, I miss bookshops and charity shops, so I may only last till my invoice is paid and then I'll be poppin' off to the shops.

This week is all about preparing as there is a big weekend coming up. Oh yes, this coming weekend is Shed Arrival Weekend and I am already excited. So many plans for what will go in there that my brain can't contain them all and I keep coming across scraps of paper where I've scribbled "wallpaper?", "where potting table?", "make seed store", "canes too big - storage!".

I will, of course, document the whole installation in tedious detail. You have been warned...