The Shed Makes An Appearance

Saturday was a very momentous (can something be "very momentous"? Surely the "momentous" cancels out the "very"? I'll stop now before I tangle myself in linguistic knots) day - for it was Shed Day. My brother-in-law - owner of the only van in the family and a man who seems to have forgotten the purpose of Saturdays (i.e. that it is probably the law that people are not forced to leave their houses before 8am) was arriving at 8.30 with necessary help.
Thank god I know him of old and was in fact already at the plot and ready to rock when he arrived at 8.15 (we are a family who can't bear to be late - or even on time - to any appointment). I'd actually been there since 8, ferrying stuff down from my car and pausing to appreciate the quiet and the view. 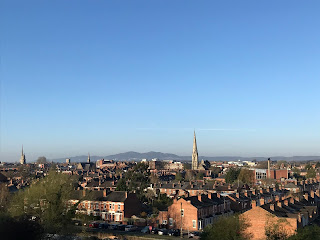 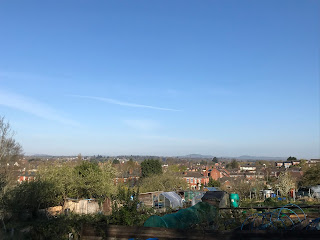 The skies over the city were beautiful, that wispy blue that promises bearable heat later, the Malverns crisply outlined. As all normal people were still in their beds, or their pyjamas at least, it was so quiet, nary a car or a clang of deliveries to break the spell. It was so quiet and early, the plot fox trotted unhurridley along his regular route home without even giving us a second glance.
One big downside about my plot is it's location. It's at the bottom of a steep slope down to the canal (the shortest route) and a good 500 metres from the main car park (the flattest route). We opted for the shortest and then spent 20 minutes (it felt like much, much longer), lugging shed panels, fruit cage sides, bags of tools etc down. And then going back up it a further 3 times as the need for different screws/nails/opportunities to prolong the agony arose. 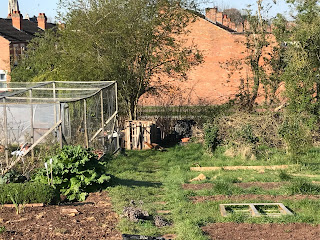 It is funny listening to boys constructing things though. The chants of "to me, to you" which never gets old, the gentle ribbing about the right way up to hold a shed panel, the banter around roofing felt and the nailing down thereof, the bordering-on-heated discussion about the right way round to put the fruit cage...
While they bantered and "discussed", I stayed out of the way and got on with putting a small fence made out of tree stakes and green-covered wire at the top of the plot. This is for the sweet peas that are currently running rampant at home as we wait for the frosts to be done, to climb over. Then I used my new edging tool (new tools!) to edge the beds and try to halt the gradual grass takeover.
Luckily, the work I'd been putting in in digging the area, raking, digging it again, raking it 500 times more in an attempt to get a flat space on sloping ground, really paid off, as you can see from the jaunty angle the door of the shed is leaning at. Bugger it all. 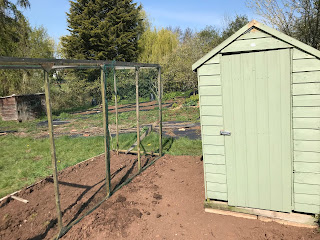 But actually, I don't mind too much. I'm just so pleased to have a shed! Finally, a place to store tools so I'm no longer carrying them around with me. A place to store a deck chair so I have somewhere to sit, instead of plumping down to the ground and then trying to lever myself back up again. A place to store a little camping stove so I can brew myself some coffee!
By the time the boys left, we'd been there for 3 hours, and I spent some time afterwards just sitting and smiling around myself, strangely reluctant to leave, enjoying the peace and quietly making plans. 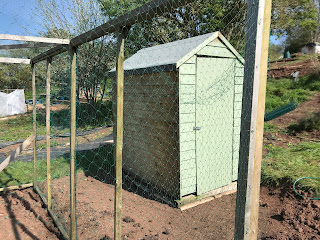 The first plan is to paint it. Bless my Dad, he was a man of practical thinking and his practical thought had been to paint only the bits of the shed that people could see, not the bits of shed that were inconveniently against the hedge. This is a school of thought I fully subscribe to, but as it's completely exposed on all 4 sides, I need to paint them. I've managed to find a Cuprinol wood paint of the same shade he had already used for the front (a rather subtle Green Orchid), so I spent a happy half hour yesterday painting the left side. I shall be away up there again this afternoon to do more. 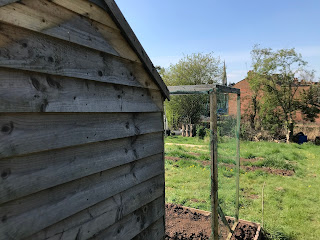 I haven't gone mad with populating the inside just yet. I want to paint the interior and put up a handy potting shelf before I do. I'll also get a sowing guide up in there as I'm quite bad at remembering when things are supposed to be sown.
By the way, if you're looking for allotment inspiration, I can do no better than recommend this episode of Gardener's World. Our allotment Facebook page quite lit up after it's airing and there was a healthy debate about whether we'd like little doors and closed off plots, or whether we'd miss the chatter of other plot holders. I do like the chatter but sometimes, after the 14th person has said "you need a rotavator on there" to me, I can see the appeal of a little hedged off, door closed area.
It's amazing how much happiness this 6x4 wooden structure has brought me. I'd rather have not had it and still had my Dad around, that much is never far from my head, but having it here feels like having him here. Not in a creepy looking-over-my-shoulder way, but in a reassuring way. He's not there but a piece of him is. And that's quite nice.
- April 20, 2021