A Life in a Day

N is digging out the bricks that form the border to the garden flower beds, I am swinging in my hammock chair and watching him (I had spent the afternoon at the allotment that day). We are chatting idily - by which I mean, I am chatting, he is wondering why I've chosen now to do so when I can clearly see he's busy - when it happens.

Chatty P, 2 doors down, has just performed his customary evening greeting to our immediate neighbours. He has returned home from work, got himself a drink, wandered out into the garden and looked over the fence to make sure they're there. And commenced conversation as above.

At that moment, Tiny Wee Mabel who, in truth, is no longer tiny but long and sleek and spiky, comes sauntering in from her explorations to enquire, loudly, where her dinner is. I remember that I haven't taken courgettes over to our other neighbours.

Yes, its that time of year and, once again, neighbours flee from the sight of me bearing down on them, for I have planted too many courgette plants and come bearing gifts of which they are heartily sick. Although A does make a good job of looking pleased and we chat for a short while about their children (2 and 4) and how everyone's been. That usual neighbour conversation: we know how we all are because we can hear each other, but we pretend otherwise.

And none of us mention the new neighbour who's moved in with 2 teenagers who use Alexa to communicate ("Alexa, tell Mum I want my tea!"), a lot of visitors in big cars and a good line in raucous football songs ("you can stick you twirly pasta up your..."). 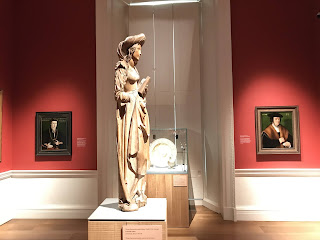 Back at home, I make spicy courgette fritters for us to eat with turmeric-roasted new potatoes and a grated beetroot & onion salad. Apart from the egg, oil, turmeric and flour, this is an entirely plot-based meal.

Up at the allotments we are nervously awaiting annual inspections of the plots. Already the news from other sites around the city are that the inspectors are taking no prisoners and a record 23 non-cultivation notices have been served on one site alone. I suspect that, because waiting lists are so long, they're under pressure to shorten them.

Had to isolate for 18 months due to a tiny thing called Covid? They aren't taking that as an excuse. We can also look forward to rent increases as councils across the country are trying to recoup losses. Sometimes with hikes as high as 50%(1), which are then broken down by invidious professionals to show that it's ony a couple of pounds a week, what's your problem?

The problem is that councils ask for the rents in one lump sum and if you're on a low income (those very people that allotments were designed for in the first place) which precludes saving, suddenly having to find over £100 is damn near impossible.

But I try to put those thoughts to one side as I spend 3 hours planting pumpkins and chard, weeding and laying brick edging to the long bed. Breaking every 30 minutes or so to watch the crickets jump and the bees bumble. One bee got himself so drunk on pollen that he fell off a mallow plant and had to take 5 to recover his senses, like a Roman gorging at a banquet. I know because I spent 6 minutes watching him. 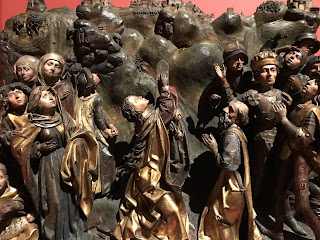 Walking back I chat to the woman whose Border Collie puppy jumps up at me. We exchange the usual about weather, the bounciness of pups, the fact there are only 4 ducklings now and not the 5 there were a couple of weeks back. A cyclist whizzes past with an imperious ding of his bell delivered too late for either of us to move. The collie barks and he pumps his legs a little faster.

Today, Friday, is a day I set aside for my own bits of writing, which is nice and explains why my posts come in time for your weekend at the moment. You lucky things. I also take some time preparing my desk for the next week: clearing out the scraps of paper, writing a priority list, writing up notes into a proper notebook (I have one for each client), filing. As I work from the room where I read in the early mornings and attempt yoga in the early evenings, this feels like a cleansing. Setting it up for the weekend. Setting myself up for the weekend.

The sky is a welcome mizzerly and grey, rains are forecast for much of it and the poor parched ground will be grateful - we've missed most of the rain that's battered everywhere else. They break over the rocky shores of the Black Mountains, Malverns or Cotswolds. I'm working on some copy for an artist friend, some resources for my website and my occasionally tinkered with manuscript. From my window, I can see fronds of the honeysuckle waving at me.

I need to order gifts for friends with babies that sit plumply in phone notifications, all milky contentment and relief. I'll write a postcard to the Kid, one purchased during a birthday visit to Compton Verney to see this exhibition. Instead of heading up to the plot this afternoon, I'll get the sewing machine out. I have a pile of dinosaur patterned fat squares that I want to play with. 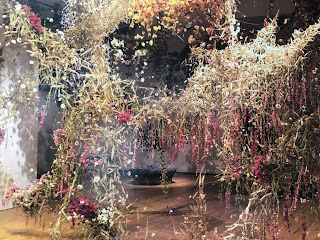 Or maybe I'll just sit and think. Today would have been the birthday of a friend who died earlier this year. Reflection keeps butting into my concentration. 2021 is the gift that keeps returning itself.

Later tonight, we are Scrabbling with friends during which much talk will be had and fewer tiles will be put down on the board until, eventually, we call it a night and a draw. Honours even. Home to bed.

Its that time of year again. The worktop by the sink is cluttered with empty jars and bottles that all need a long soak in hot soapy water b...