A little while ago, when recording a podcast epidsode, one of the regular contributors said that they had started reading The Mirror and the Light. I admitted that I couldn't face it because I knew what was coming.

As does anyone with the merest smattering, a thin Marmite spread if you will, of Tudor history knowledge. It's not spoiling the book to say that Cromwell dies at the end of it. I'm not sentimental about what sort of man he was - but having been drawn into being invested in him for 2 massive tomes, plus Mark Rylance's performance in the BBC adaptation, I was not keen to bear witness to his fall from grace.

And what a fall from grace it was. Merely weeks after being made an earl, he was arrested on charges of treason, facing the worst form of execution, friends melting away like butter on a hot day and enemies churning the water relentlessly. It was a life bookended by ignominious circumstances and told in exacting detail. 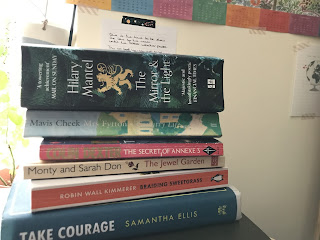 Anyway, after being lulled into buying it by the wonderful tones of Anton Lesser reading it out (also BBC - radio this time), I took my sweet time about reading it. A couple of pages a day, a paragraph here, a sentence there. Nibbling my way to the end. Which I finally reached a week ago.
It really is an incredible piece of work, regardless of how you feel about the Tudors, Cromwell or Mantel. The level of detail is extraordinary and I do wish I'd had it at the time of my A Levels - the machinations of Henry's court is so much more clearly explained here than I remember it being from set texts.
Obviously, there has to be the disclaimer that this is a work of fiction and Mantel imbues him with a sensibility we will never know if he really had or not. But it probably would have been a better source than Blackadder Series II, which at least one friend used as a reference point.
All that said, and due reverence paid to Mantel and her diligent research, would I read this again? Probably not.
Unlike Take Courage, which I've read twice before. Don't know much about Anne Bronte? This is a good place to start. She's been underrated for too long and this is a step to redressing that balance. She is my favourite Bronte sister and the only one who tells life like it is, with a clarity and spareness that's a shock after the overblown Gothic drama of the others. She's the cool drink of water amongst the flaming brandy glasses.
Braiding Sweetgrass was another I'd avoided for a while, having seen it toted once too often on Instagram as the book du jour by others. I am ever one for swimming against the crowd but this time I'd denied myself a treat and shame on my inverted snobbery. Lesson learned.
I had an almost emotional reaction to parts of her book, for reasons I haven't yet deciphered. I'm still thinking about it, about the suggestion that there could be "a different relationship, in which people and land are good medicine for each other." This is the week where the sea was turned into a literal boiling hell thanks to people.
A week in which I contracted the cirus that's laid waste to so many, and which makes the final sentences so very relevant:
"Gifts of mind, hands, heart, voice, and vision all offrered up on behalf of the earth. Whatever our gift, we are called to give it and to dance for the renewal of the world.
In return for the privilege of breath."
- July 07, 2021