This is the Time

Now I've managed to get that feeling out of my system - and off my Instagram feed - I have been feeling much better (bar the potential case of Covid I've developed...waiting on proper test results for that one, not just the lateral flow versions). I've found it's very easy for me to become overwhelmed recently and things that I could have shrugged off or battled through, I can't.

More importantly, I don't want to. And I don't see why I should have to.

Yes! An epiphany regarding my own welfare! At the grand old age of 44 and 11 months and 2 weeks (yes, it's my birthday soon). But still, better a late epiphany rather than none at all. Needless to say, this epiphany has N quaking just a little bit as I fix him with a gimlet eye and say "Up. With. This. I. Will. Not. Put."

To be fair, the "this" usually refers to the empty, used cereal bowl sat on top of the empty, waiting-to-be-used dishwasher rather than some terrible thing he's said or done.

But I cannot, for the life of me, work out why men and children behave this way. I suspect that's a question for psychologists. As the mother of a son, I've noticed he does the same thing but that's related to the deprived years sans dishwasher that he no doubt regales colleagues with. Truly, first world problems. 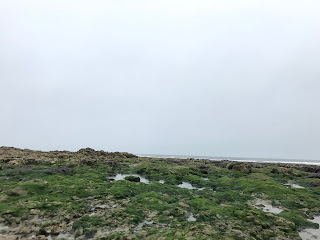 We spent last weekend with said son, who I haven't seen since Dad's funeral in March, and it was splendid to see him again. We also caught up with friends that we've been remotely quizzing with for over a year but had yet to meet in person. I managed not to cry. But I do miss my boy.

The weather turned against us as we hit the M42 and by the time the North-East borders had been crossed, it was settled into persistant mizzle and winds that threatened to lift gazebos from their fastenings. A sea fret had arrived and refused to budge. Still, we managed to see a couple of beaches, pick up some interesting pebbles (apparently the Kid's boyfriend now refuses to walk along beaches with him because he keeps stopping to look at pebbles. I am very proud), eat at a couple of pubs and generally just enjoy ourselves away from the house.

Chonky Thor (who we're now calling the Great Boo mainly so we can cry "Great Boo's Up!" in homage to Blackadder on a regular basis) and Wee Mabel went into a local cattery. Tucked in by a river, by a medieval bridge, surrounded by trees - it quite made me want to give up everything and open a rural cattery. They forgave us within an hour of getting home. In fact, the owner sent us pics of the Great Boo enjoying being petted. Traitor. 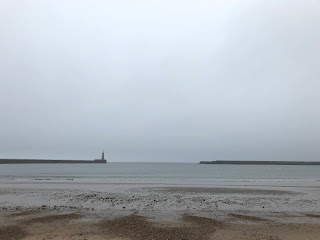 Speaking of giving everything up, I recently had to step back from a work contract. In most part due to the aforementioned epiphany. I hate stepping away from things like that but sometimes you've got to acknowledge when you need to rest.

I'm not much of a one for poetry (just say what you mean!) but this one, pinned to the wall by my desk, is really calling to me at the moment, especially the first 3 lines. I think I need to take its advice.

this is the time to be slow
lie low to the wall
until the bitter weather passes . 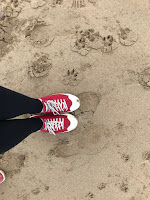 Try, as best you can, not to let
the wire brush of doubt
scrape from your heart
all sense of yourself
and your hesitant light.
If you remain generous,
time will come good;
and you will find your feet
again on fresh pastures of promise,
where the air will be kind
and blushed with beginning.
- July 02, 2021