This morning, the Retreat (aka the spare room from which I read, write, work and occasionally yoga) is filled with the dulcet tones of large vehicles reversing and the fragrant smell of hot tarmac that not even the last of the allotment sweet peas can overcome.

Of course, the noise and fumes would be greatly reduced if I closed the window but then I'd miss out on the breeze that is making this quite humid day bearable. So I'll deal with it for now. Oh no, an angle grinder has started up. Okay, I give in, the window is getting closed. 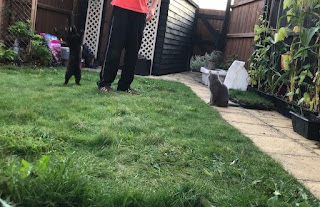 Over the roofs of the houses opposite, the skies are quite low and grey, threatening a rain that might or might not deign to fall on us. The vegetables at the allotment will be grateful if it does. I'm switching to a system of one long watering a week in order to encourage roots and healthier crops, and to reduce water consumption. We have 2 water butts: 1 at home and the other at the plot, but we want to get a second for each. It's likely I'll need 3 or 4 for the plot eventually.

I like big (water) butts and I cannot lie.

This week I had the immense pleasure and relief of being pain free in my left shoulder for an afternoon. Such bliss! It seems I managed to tear the muscle somehow and, after my 3rd session of sports massage (during which I'm torn between crying at the pain and whimpering with pleasure because she's unknotting knots that I've carried around for YEARS), I was filled with a flush of happy daydreamy endorphins. Readers, I chatted away merrily, laughed, did silly voices, made jokes, sang made up songs to the tunes of other legitimate songs. 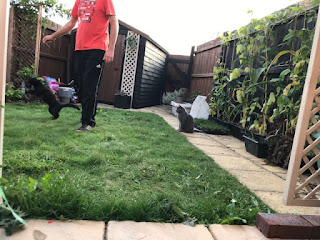 And that was all in the car coming home.

It was marvellous and I cannot wait for the next session. It was the most blissed out I've felt for a long time. In fact, it reminded me that I haven't properly laughed for a long time. This year has felt too heavy to allow it, and I don't think I'm the only person to feel that. Emails are full of people saying how worn to the nub they are.

Sod all this "back to normal" nonsense spouted by politicians. I say we all need a 2 week long holiday from reality. If we did it in shifts, it could be managed for everyone, even those couples with kids. Nothing fancy, just 2 weeks in a cabin in the woods or by the sea, no mobile reception, no work but lots of nourishing food, splendid reads (or things to watch if reading is not your thing), drawing materials and views to feast your tired eyes on. 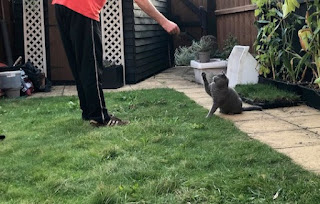 And it has to be on your own because other people, even the ones we love, have needs that must be accommodated and that means compromising on your own needs.

Think how restored we'd all be as a nation if that were allowed. Start lobbying your politicians now!

Until the happy day that becomes enshrined in law, I am encouraging myself to Be More Mabel. Her intense Mabelness means that her life is largely stress free - barring the occasional run in with the Evil Tabby. Whether it is lounging on a comfortable surface, eating, going about the serious business of chasing things, or keeping tabs on the garden, she devotes her attention entirely to it for a brief period and then wanders off when it all becomes too much or something more interesting comes along.

Such as a particularly enticing butterfly.

Certainly this ability to be endlessly curious whilst at the same time attuned to her own needs (bees in the lavender may be irrestible to chase but nothing must get in the way of lunch) is an enviable one to cultivate. She cares not about things that are beyond her sphere of influence but focuses entirely on those that are, such as making sure I know it's time for her lunch. She has actually taken to patting my leg with her paw if I'm not quick enough off the mark. 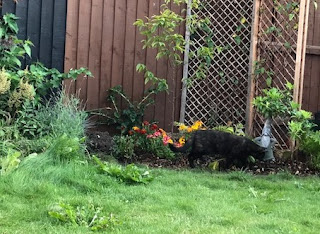 Mabel meets the garden wizard (aka the gnome my sister got me.
It is the only gnome here before you start to get worried).

And at a time when global news has our attentions and worries scattered like so many marbles dropped en masse from a great height, that is probably the only sane way to keep going.

Last night we finally gathered ourselves enough to go and see Black Widow at the local cinema before it closed. Gosh, that was a great film. Funny, clever, brilliantly choreographed fight scenes, enough action and bangs to make me jump, a thoughtful arc about family and memory and the connections we build through circumstance. Loved it. Florence Pugh is fast becoming my favourite actress, and I'd watch Rachel Weiss read the newspaper.

It's a shame that will be the last Black Widow outing. I really feel the character was only allowed the freedom to develop in the last couple of Avengers films, prior to that she'd been supporting the Big Strong Idiot Men. Think how much more we could have explored her character with more films. Opportunity missed again.

Right then, my hour's blogging time is nearly at an end (I time it by the length of a Backlisted podcast) and my empty coffee mug suggests it's time for a refill. This week I've been mostly reading The Morville Year, The Garden Jungle and working slowly through All the Devil's Are Here, which I'm not entirely sure I like, even though I'm quite partial to a rundown seaside town. Maybe psycho-geography is not my thing? 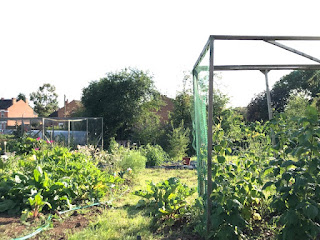 Ubiquitous allotment pic. Because if you haven't seen one, have I even blogged?

What is my thing is the definite tint of Autumn that's appeared in the early mornings. Just enough to brush your fingers gently as you walk alongside the canal, and to mean the duvet is required again. Splendid.

As a treat, I'll leave you with this clip of Jeremy Hardy singing Hallelujah  in the style of George Formby, a clip to provoke laughter in anyone. I still miss Jeremy Hardy - he was an absolute genius and all round decent chap. We were lucky to have had him on the planet.

There was a thing going round Instagram last week, asking people what they were doing on 20th May 2020. For those readers not in the UK, tha...