How is it October?

I distinctly remember, as a child, moaning about how dreadfully long the days could be, a long drawn out whine of “I’m booooored”, especially if it was raining and the prospect of nothing but playing Monopoly with my sister was on the cards.

I still can’t play Monopoly without smelling Sunday lunch cooking in the background.

Of course, now as a grown assed adult, with my own house to maintain and lunches to make, I completely understand the bitter laugh that invariably came from an adult in the room. 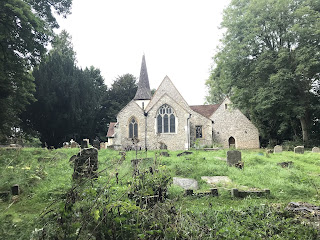 Days are simply not long enough any more. And it’s not all down to my Instagram habit.

Anyway, here we are in my favourite month, despite it feeling that the start of September was only a blink away. Mornings are nippy, blankets are out and I have made 3 soups in the past 2 weeks.

Thank god I no long have to pretend that I’m perfectly happy with salad, thank you very much, could you pass the coleslaw and cheese, and the dressing and the other thing to smother it in. It is much easier to eat healthily in Autumn and Winter, I find. Soup needs no dressing and ice cream casts no spell when it’s cold outside. 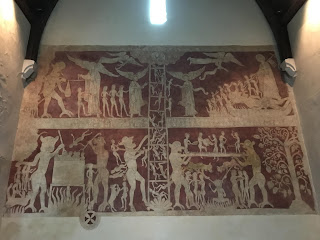 If I could, I’d live in perpetual October with brief forays into June and July for birthdays.

But enough fantasising about squash, ginger, coriander and lime soup with garlic flatbread to dip, back to the matter in hand: my disappearing September.

Most of it went in work and the start of college (my return to education following a 27 year break), but we also had a trip to Surrey for a friend’s wedding. I have only been to Surrey once and can confirm that it’s roads are as badly surfaced now as they were 15 years ago. 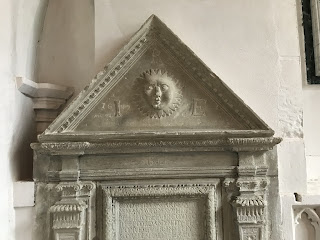 But we had a splendid time at the wedding which was nice. Even nicer (sorry Charlotte), was the church in Chaldon that a friend of mine had suggested we visit in the morning to see the Doom painting (second photo).

I'm sure you'll agree that as wall paintings go, that one is just...wow. I mean. Seriously. Can you imagine being an illiterate 14th Century peasant with no scientific knowledge, and that's the image that confronts you the minute you walk into church, and when you leave? 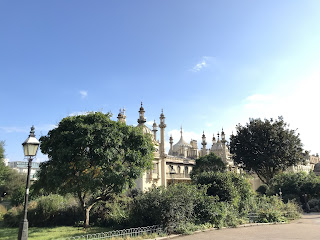 Enough to frighten the beezus out of anyone.

It was also home to one of the most unintentionally hilarious monuments I've ever seen (not shown). Along the lines of "she survived a shipwreck on the way to somewhere foreign, sailed out there again, suffered disease and the birth of eight children far from home, bore with fortitude all the inconveniences of life there, died on the way back home". Well honestly, wouldn't you? "That's it, I told you I'd had enough. You men and your bloody ships." 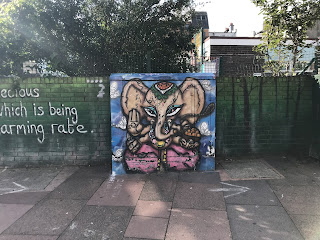 We visited Brighton while we were down there. Umm, sorry Brighton, but I think you've probably seen better days than a humid Monday out of season and post-pandemic. Nice graffiti in places though, although I did think they could have opened their museum. Boo. 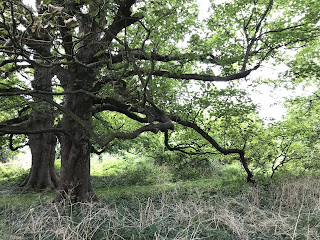 There were some excellent trees and equally excellent views from the balcony of our AirB&B. There was delicious pizza, fish and chips, and a wedding buffet that transcended the once standard pork pie and cold chicken legs. There were friends, laughter and, almost uniquely for an AB&B, a very comfortable bed.They got a good review for that alone.

Certainly not for the fact there were only 2 tea bags and 1 toilet roll in the property. 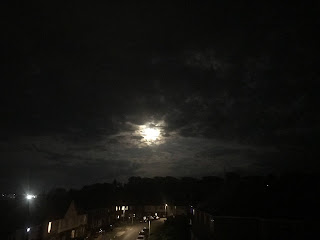 There was a big old moon, sea gulls in their rightful place (i.e. by the sea and not attacking moorhen chicks along the canal back home). There was rest and relaxation and a not entirely hideous return journey along the M25 - it was no picnic, but I expected worse.  You can't help thinking of Crowley and his M25 shenanigans in Good Omens when you think of the M25.

No demons were summoned during the course of our journey. I think. 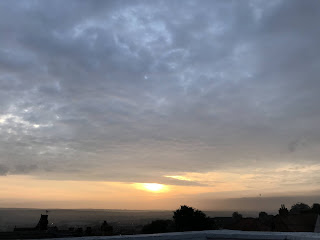 This week, the Kid is home from Sunderland for his own slice of rest and relaxation. Working as a carer for adults with complex (and sometimes undiagnosed) mental disabilities and needs during the pandemic has been an exercise in fortitude, grit and sheer determination to see they suffer as little as possible despite the shit show going on outside the doors.

I've never been prouder and have made all his favourite meals this week. He all but cried at the sausage and bean casserole that was a childhood staple when he was growing up. Yes, I am sending him back with masses of filled tupperware and, hopefully, a renewed vigour for the challenges ahead. He'll need it.

Back to work next week but hopefully I'll find time to catch up with my trip to London before then.

If not, rest assured I shall be composing never-to-be-written blog posts while I dig manure into my plot. Kudos to all those taking part in Blogtober. I am enjoying reading your posts. More power to your typing fingers.

I'm currently writing this from underneath my duvet, my trusty red scarf around my neck and a Small Wee Mabel stretched out over my toes... 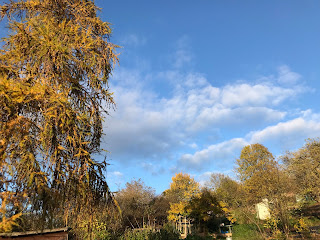