October, where did you go?

I mean, who decided that time could speed itself up? I would have liked to savour this month, my favourite, but it wasn't to be. It moved at it's own sweet merry pace and I clung onto the sides.

A lot of it has disappeared into the hecticness of work. There have been more than a few working-late evenings and early-start days. Given that I mainly work from home, this is hardly down-the-coalmine stuff. The busiest contract is coming to an end in December and while I shall miss the people and the income, I'm looking forward to having the time to develop ideas I've had for a while. Courses and resources I want to develop may actually see the light of day.

Speaking of courses, the RHS Level 2 that I started is...okay. The other students are great and I've learned how to take a softwood cutting, and mark out a square with perfectly straight edges and right-angled corners. The module the lecturers selected for us is "Vegetable Growing" and that feels a bit redundant as I already do that. I think I was hoping for something more challenging than an assessment on how well I double dig. But I will probably still learn new things as well, so I'm trying not to be bad-tempered about it. 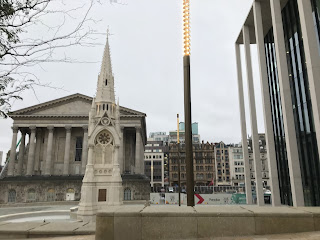 Aware of my general lack of exercise and movement since working from home (I used to easily clock up 20k steps or more when I ran a museum), I brought myself a cheap pedometer and am pleased to report that every day this week, I've broken my target with room to spare.

This morning, I woke to the sound of rain drumming its beat against the roof. It's quite a comforting sound on a Saturday when I have no plans, limitless tea and a warm Mabel leaning against my leg. I have a couple of candles lit, which I've been doing most mornings this month - sometimes, I sit and stare at the flickering, thinking of nothing. It's the nearest I come to meditation. 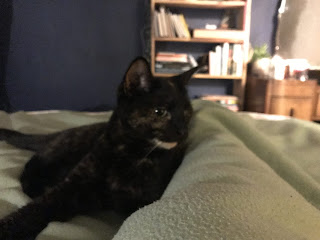 This week, I had to be in Birmingham for a meeting and it was fab. I do love that city, for all it's faults. We met at the extraordinary Library, ate lunch at the beautiful Ikon gallery after wandering up and over the canal. Shopped at Muji for my favourite pens (0.78 navy blue, thank you) and read on the train home.

I have been reading Barbara Comyns' Our Spoons Came From Woolworths, but the desire to reach into the pages and soundly smack her selfish, self-serving husband is too great for my peace of mind. A friend came to the rescue with a copy of Luckenbooth, so that's my Halloween reading sorted. 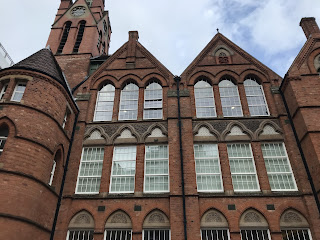 I said goodbye to my lovely nutritionist at the start of the month. My excema, while under control, is still here despite blood tests, a veritable alphabet of supplements and nearly a year of restrictive eating. When she suggested yet another limitation, my brain snapped and went "Nope, can't do this any more." So I refused the next blood test, put my 2 remaining appointments on ice till next year and watched my bank balance breathe a sigh of relief.

Not sure what to do about the excema now. It's still here like a flaky, aggravating pal who doesn't know the party is over. N suggested seeing a doctor. I probably should but can't yet face dealing with the receptionist that guards the appointments. 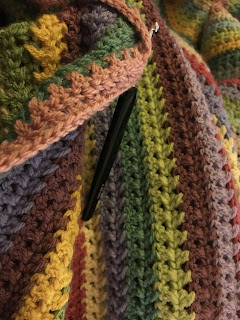 Still working verrrry slowly on the Attic 24 Meadow blanket. The rest of the world finished theirs in February, it seems. It always takes me a year to finish one, what with one thing and another.

I managed to get the majority of the shallots into the ground at the allotment, and the last of the brassicas in. Now will come afternoons of pruning, weeding, planning and generally tidying up, especially inside the shed. I haven't created the little nest in there that I'd hoped, but maybe winter will be the time to do it.

In N news, we got engaged. I should have led with that, shouldn't I?? The ring is just about the shiniest piece of kit I've ever worn and I've been married once before, in another lifetime. I do not have a photogenic enough hand for this ring. Plus, I can hear generations of Northern ancestors telling me to Know My Place. But lookit, pretty. 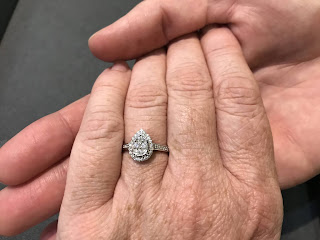 Waiting until it arrived to tell people was the hardest thing: I wanted to run through the streets with a cow bell yelling "Engaged! Engaged!"

The wedding will be next September, hopefully. I am too old for long engagements - they have a habit of drifting on for years with no resolution and I am of the age where 50 is hovering just on the edge of the horizon. I want to feel present. Anchored in a way I haven’t felt since Dad died.

Plus, I want to gather everyone I know and love and vaguely tolerate together in a field, with wellies under the dress if necessary, and say thank you for being here despite everything, now raise a glass to my Dad, who would have given a better speech.