What Happened to all the Books? 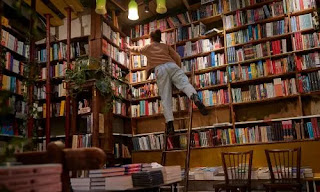 But as there hasn't been a book update since...yikes...June, you're getting a sort-of-one anyway.

You see, I am still reading - lots - I'm just not recording it anywhere. For the first time since 2014, I've stopped keeping my book diary. I rarely Instagram (when did that become a verb?) what I'm reading and I don't often mention it to anyone.

It's not that what I've been reading has been unmentionable! More that I was beset with a whats-the-point feeling. What is it I'm trying to do with the diary? I don't mind re-reading books, in fact I've been known to actively seek out books I've already read just to enjoy them again.

Nor am I embarassed by what I read. It's not like I've got all the works by EL James or Jeffrey Archer on the shelves (although I would ditch the Game of Thrones series if they were mine or I thought N wouldn't notice - I have tried covering them with Armistead Maupin instead) hiding on the shelves.

Do I think the Kid or any descendents of mine will be interested? No. And knowing the Kid, descendents are very unlikely, apart from my niece and nephew who surely won't care what Mad 'Burn the Patriarchy!' Aunty T read back in May 2017.

I had to face the fact that I was probably really only keeping it to, well, show off. Mostly to myself, some to anyone lovely enough to stop by here and read stuff. A little to those mythical descendents who I imaged saying (in binary because all language will be obsolete by then and we'll just be brains in carbonite structures with electrical impulses for senses) "Gosh, look how well read our illustrious ancestor, Mad 'Burn the Patriarchy' Aunty T was! And she was right to burn it all down. May we forever deify her with this digital, virtual structure of a tree because there are no real trees now."

Maybe I should write dystopian fiction?

Anyway, the point of this is that the diary has been ditched and I am a much freer reader for it. There is an absence of pressure, a reduction of ego, a lack of assumed judgement at reading 4 Allinghams in a row.

But what about the promise I made myself last August, when the world was breaking into tiny angry pieces and this small something became the tiniest raft of hope? I must confess that events of early this year derailed me for a little while, but I'm back on it and see no reason to stop. It has brought open new worlds for me and, I tentatively think, new thinking. I'll keep going.

Ditched: the Patrick Melrose books because, fucking hell, who needs that toxicity in their lives?

Top image of the Shakespeare & Co bookshop, Paris. Courtesy of The Guardian. Support independent bookshops! And burn the patriarchy!