Bimble in the City

At the beginning of November, in what I'm hoping is the last big excusion of the year*, we headed to London (twice in one year!). N had work and I was going for an explore. We were meeting up for the leaving do of one of his colleagues later in the day.

The weather was perfect: cool, sunny and with that lovely tingle in the air that autumn brings. With strict instructions on how to cross the road (I once was nearly run over in London and only saved by N's quick reflexes...and better road sense), we parted ways on the tube and I headed to St Pancras Old Church. 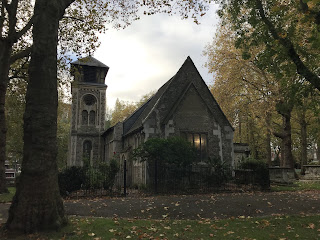 Old as in, it is the OLDEST site of worship in London. Tucked away behind the British Library, down past the Francis Crick Institute (where I muttered some rude words on behalf of Rosalind Franklin), and in a clean quiet spot of London, it's rather lovely.

The church itself is mostly Victorian. Inside it's all whitewashed and sterile with some cracking iconography. Gilt images of saints that flicker in the light of the dozens of candles that people set out.

I'd been reading about this place and Hardy's Tree and a particular grave, but before I put myself to the task of finding them, there were some substantial monuments to admire... 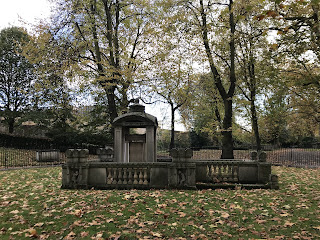 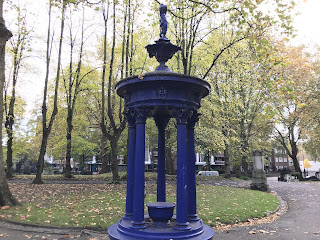 You've got to hand it to the Victorians, they give good monument. Not for them the discreet little plaque on a bench. At least, not for those that can afford something more splendid. And whilst it might not be practical, it does at least announce "THIS is how much I loved this person. THIS is how much I miss them. THIS is how much money I have to tell you all about them."

Mostly, of course, it's about status and showing off. Our man Morris, back in Kelmscott, kept his and his wife's affectingly simple but then, he doesn't strike me as an ostentatious man, more one that keeps his grief close and private.

Hardy's tree is fenced off nowadays, so this is as close as I could get to it, which is annoying but I’d mostly come to see a different grave. 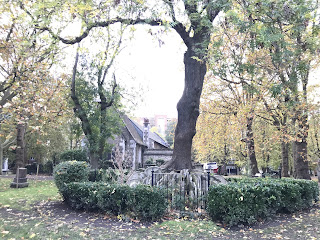 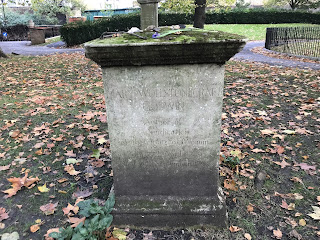 This is the grave of Mary Wollstonecraft Godwin. She of  A Vindication of the Rights of Woman, the key feminist text (not that I've read it but, you know, one day I will. That and the Second Sex). Her youngest daughter, Mary (she of Frankenstein) would meet Shelley, who her father disapproved of (and rightly, in my opinion) there. Scurrilous rumour would have it she lost her virginity to him there. I'm not sure what to believe but a "sublime and rapturous moment" is rare in first-time stories, so I'm not totally on board.

Mind you, it is exactly the sort of thing Shelley would do. *insert eye roll*

Anyway, back to our girl, Mary W G. I'm pleased to say that after a rackety start which saw her tearing around an unstable Europe after a bloke who was the definition of Not Worth It, she found a like mind, a supporter and a short-lived happiness (she died shortly after M S's birth) with William Godwin.

I love that Godwin was considered an anarchist, but not where his daughter was concerned. He was furious about her liaison with Shelley and came across all Conservative Papa. I suspect he'd met chancers like Shelley before and had the measure of him.

Today, people leave offerings on her tombstone. There was a motley but touching collection of small pebbles, shells and flowers on the top. Yes, I did add my own small pebble. Yes, I do always have a small pebble in my pocket.

Then it was back through London via the British Library and Regents Park, to meet up with N to party the night away, up until the point all that walking caught up with my arthritis and I stopped, like a horse refusing a jump. 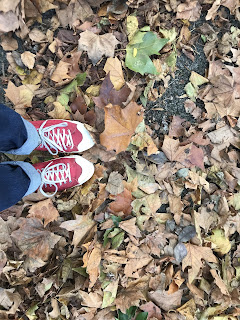 But there, that was my last trip to London for a good long while. Now is the time to make soup laden with giner and turmeric, to crochet blankets under more blankets, to drink coffee from a flask at the allotment and watch the winter sun come up.

*I mean, it's absolutely aces to see everyone again and see things and go places but I'm quite tired now and my allotment needs me.