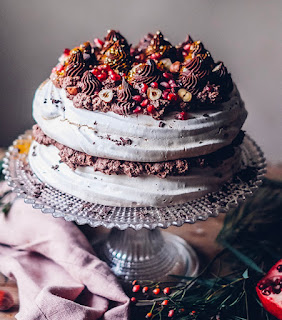 Every family has them. Those odd side dishes or food rituals that only appear on 25th December and incomers (sons and daughters in law mainly), look on with undisguised horror and incomprehension. But to your family, they are non-negotiable. If these foods do not appear, it isn't Christmas and boy, will you make sure everyone knows about it.

There are the things you buy in - Quality Street, Cadbury's selection boxes, Cadbury's chocolate fingers, Terry's chocolate orange (you see where I'm going here, right?) - and things you make, bringing them to the table with a sense of propriety and pride, smiling like a beneficent god as the rest of the family choke down something they don't really like but wouldn't dream of hurting your feelings by saying so.

For years, until Mum mastered the art of pastry, it was mince pies. My sister and I aren't sure, all these years later, what happened as this usually exceptional cook took the raw ingredients of flour, fat and liquid and turned them into something you could build a house with. Her pastry throughout the rest of the year was spectacular: light, fluffy, crisp, flaky...whatever it needed to be, it was. There was just something about the time of year that changed the way the pastry fell together. Now, years after those days, I suspect an egg was missing from the mix.

These days, her mince pies are delicious, but somehow, I still hanker occasionally after one from my childhood years. Whenever I’m short of a weapon. Or some grouting.

Dad didn't cook, wouldn't have wanted to cook, but would earn unending brownie points with us kids simply by deigning to share a Smartie or two from his Christmas stash.  If we were very lucky and very good, maybe even a square or - heaven! - a line of 4 squares of Fruit and Nut chocolate. Despite this being the total sum of his culinary contribution, his tastes shaped our Christmas lunches.

I remember describing it to a friend once and she looked at me with horror; "Mushy peas? Mushy peas have No Place on a Christmas table!" They did in our house. He was not a fan of most green veg, my Pa, but put a bowl of mushy peas in front of him and he was as happy as a pig in a pea field.

Likewise, he was not a fan of the claggy fruit-laden Christmas pudding. Yes, he'd set it on fire for us to ooh and ahh at, but that was it. Once it was safely blown out, he'd help himself to a wodge of syrup sponge pudding, adding extra syrup from that green Tate and Lyle tin that brings back such a sugar-rush of memories now, and then complain if the custard wasn't thick enough to stand a spoon up in.

If there was not enough left for a second helping the following day, he'd sulk and refuse to share any more Smarties.

Pity my poor Mum, influenced by Delia and Keith, desperate to bring a bit of class to our table with spiced red cabbage, goose fat roasted potatoes, a delicate cream for the puddings, only to be thwarted by his distinctly down to earth tastes. "Fancy tack!" he'd say and carve himself another slice of custard.

This year, I tentatively suggested that we opt for rib of beef or goose (I like both more than turkey) when Mum voiced concerns about a possible avian-flu-related turkey shortage, only to be shouted down with "we always have turkey!". Like I said, some things are non-negotiable.

There will still be mushy peas this year but there won’t be a syrup sponge pudding. I’m not sure any of us could eat it without crying, and god knows, this year has rendered us soggy enough as it is.

Instead, I’ve offered to make a festive pavlova. 2 layers of chocolate meringue, sandwiched together with a chocolate liqueur spiked cream, some pomegranate seeds and more sugary stuff that I need to buy in as I’ve sworn off it till then so we’ve nothing sweet in the house. I WILL make us a pudding to ooh and ahh at and fight over the second helpings or, so help me, take us all down with diabetes in the attempt.

Of course, it has to survive the 40 minute car journey from here to there, so we may well be eating an Eton Mess by the time it reaches table.

***Image above from Food Stories - click on photo for link to recipe - rest easy, mine is NOT going to look like that***

There was a thing going round Instagram last week, asking people what they were doing on 20th May 2020. For those readers not in the UK, tha...