It's All In The Name

The problem with writing something so very personal and revealing in a blog - like the previous post (and thank you all for the kindess) - is where on earth do you go from there? I'm not up for building a blog based on rants or politics (ugh) or anger in general. My general demeanour is quite cheery and positive, especially in the mornings, which I've been informed is irritating for those who find mornings a trial, and I'd always rather find a bright side. If it contains a dose of silliness, then so much the better.

We're usually encouraged to take life very seriously. All that admin! Being on hold for an hour, forced to listen to corporate music! Behold a new state of affairs that you can influence in No Way but need to be very angry about! Lo, a new instance of man's inhumanity!

But life is inherently ridiculous, human life in particular.

For example, during a Zoom meeting this week, Tiny Wee Mabel came and shouted very loudly that she was hungry/bored/tired, before hopping on the bed behind me (I work in the spare bedroom, aka The Retreat). For a moment, I breathed a sigh of relief as she looked settled to sleep. Then, as I attempted to sound professional while explaining mentoring and grant programmes, she stuck her back leg up in the air and proceed to...well...groom herself. Right there, in that spot. In full view of the meeting.

I am here to tell you that it's impossible to sound professional while your cat is cleaning her arse behind you and your new colleagues are falling aout laughing.

In another example (2 in one week! My cup runneth over), on Thursday, I found time to walk down to the library to return some very overdue library books. I took my new route, down what I've named Urine Alley, past the back of the uni buildings and along the railway arches. On the way back, I spotted a street sign in the alley that I hadn't noticed before: Cheshire Cheese Entry. 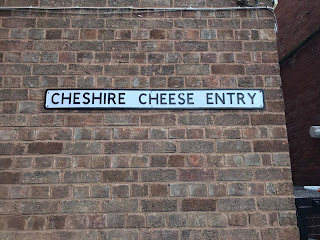 It was completely in isolation. There was no Lancashire Cheese Close, Edam Avenue or StiltonTerrace nearby. There was never a dairy here (I checked because I'm that kind of nerd). For no good reason, someone somewhere decided that this narrow passageway, barely wide enough for one person and frequented (judging by the smell) by the Open Weeing Society (there is no such society, I checked that too), was worthy of the grand title of Cheddar Cheese Lane.

Town planners let loose on road names is one of my favourite ridiculous things. A cluster of Romantic poets despite being miles away from any poetic location. A commemoration of sea battles despite being firmly inland. Trees! Trees are a favoured street naming device, especially on new estates where once woods or orchards stood. Do they not see irony?

I sometimes wonder what sort of conversations go on in their offices.

Town Planner 1: it's no good, sir. We've run out of poets, trees, flowers, royal residences and local landmarks for the new road names.
Town Planner 2: I see, Jenkins [they are my characters and if I want them to sound like they've come out of the 1950s, I will]. This is no good at all.
TP1: I know, sir. The crew are terribly worried.
TP2: well, just throw some battle names out there, Trafalgar and so on, that'll sort it. Or generals, Wellington, y'know.
TP1: Can't do that, sir. Residents are raising questions about colonialism.
TP2: blasted snowflakes! Can't a man name a road after a known xenophobe anymore?
TP1: It seems not, sir. Not without scathing articles in the Guardian
TP2: Damn their eyes! Then it's no good, we'll have to use the Emergency Plan. Gather the team's lunches.
TP1: what?
TP2: you heard me, Jenkins! Emergency Plan! Lunches! Hop to it.
TP1: Well sir, we have sandwiches - ham, tuna mayonnaise, egg and cress, cheshire cheese - and a tub of couscous. Can I just say that I don't understand the reason...
TP2: Of course you don't! Never had to use the Emergency Plan in your time, Jenkins. This is an historic day. Those unnamed streets will now be: Cheshire Cheese Entry, Ham Alley, Mayo Close and Cress Terrace. But forget the couscous, we don't want people thinking we've gone completely barmy.

At least there was no cat in this imagined town planning office. God only knows what the street would have been called if there had been.

What’s your ridiculous thing this week? 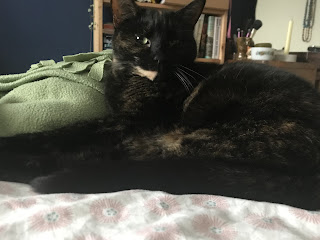 Email ThisBlogThis!Share to TwitterShare to FacebookShare to Pinterest
Labels: cats, life, My Week In..., walking