January at the Allotment

Mostly this morning, I am extremely tired thanks to the winds that blew a hoolie round the house all night and made me fret for the safety of our newly-constructed mini-greenhouse (fret not, it was still standing when I dared open the curtains this morning). So I've given myself permission to spend the morning messing about with seeds before I crack back onto work this afternoon.

Yesterday, I grabbed a lovely couple of hours at the allotment. There was more digging of the long bed to be done but I'm pleased to report I'm now on the last third of it. The resident robin bobbed about nearby, on the look out for any worms, so when I sadly chopped one in half (and I was genuinely sad about it), I threw him the pieces and he darted off with his takeaway lunch.

Which reminds me, my Mum recently told my niece about the legend that robins are the spirit of departed loved ones, come back to check on you. Pause. "I don't think Grandad is a robin," niece said thoughtfully. "I think he's a pigeon."

Which has made us all laugh for weeks, every time we see a pigeon. 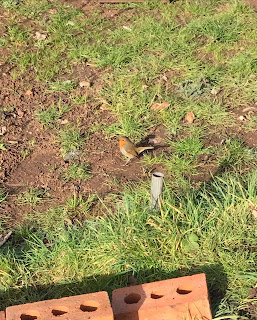 It was good to be up there, with only a scattering of other people around, tending their own plots. The "You want a weed killer on that" man was there, hands in pockets, shuffling about his plot and stopping everyone who walked past to say "Werrrllll, I haven't seen so-and-so for aaaages. He's prah'bly quit." You may imagine that he is a bundle of joy wrapped in a holey jumper with a bad, slightly Hitler-ish moustache to bristle at things.

Also up there were the Descriptive Couple. They like to allotment loudly, telling each other what they're doing. "So, I'm putting in the broad beans while you weed around the onions, right?" "Yes! And then I'll prune the raspberries while you turn the compost." "This is all great fun, look I've found a millipede!" When they got their plot, they smeared mud on their cheeks and danced around, hugging each other. They are adorable but not peaceful. It was certainly good to be up there and feeling more positive about the place than I had been back at the start of January. Then, it had all felt overwhelming and depressing. Now, I was reminded that I've done this before and I can do this again. That, although the squirrels have dug up my spring bulbs (*shakes fist in general direction of squirrels*), the rosemary is shyly flaunting it's perfect little blue flowers.
The raspberry canes had buds on them and the rhubarb had new shoots and everything, despite the cold wind whipping at my ears, felt ready to get going again. 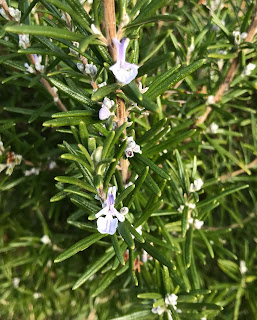 Back at home, thawing out with a hot chocolate (a particularly nice one, worth breaking my no-sugar vow, from the Harth chocolate company), I watched with increasing amusement as N put up the greenhouse. I thought the moment where he appeared consumed by the plastic covering, flailing his arms from underneath, as though covered by fog, was funny enough, but he then manged to put it over the frame with himself inside and the door still zipped up. Nearly spat out my chocolate as he mimed being stuck and then picked up the whole thing, turning around in circles.
Funny man. 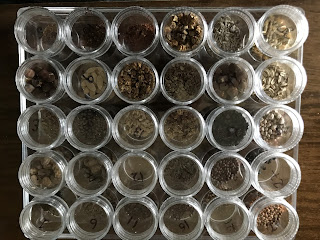 This year, I've made myself a planting calendar of all the (70+. Yikes. Now I know where my money went last year) seeds I have and when to plant them. Oh yes, shit just got real as I am determined - once more with italics, determined - to make more use of the plot this year. No longer will I wake in August and realise I am 4 months late getting pumpkin seeds started. No longer will our windowsills be crammed with leggy seedlings, desperate for repotting. No more will I glower resentfully at those plot holders who appear to have it all planted out and ready to go.
Oh no, this is my real new years resolution. I shall be the allotment holder all others envy. My potatoes will be plentiful, my berries bountiful and my squash splendiferous. People will congratulate me on the progress and ask for advice. I shall smile quietly and gently steer their gaze from that giant yup of dead wood at the end of the plot.
Fake it till you make it.
- January 31, 2022