I know. Extremely brave of us. And I say ‘us’ loosely because it was just N up the ladder. I don’t do ladders.

Anyway, when we brought the house back in 2019, we’d been completely stymied about how to open the hatch (don’t laugh). Then my neighbour had given dire warnings about the depth of the insulation and how he’d had to have it boarded over before he could use it. So we pretended it didn’t exist until this year when I had a small, totally reasonable, meltdown about how much I hated tripping over the boxes of Christmas decorations in July and other assorted detritus of life that were better placed in an attic out of sight and reach of toes.

This then prompted an overdue January clear out of things upstairs. So many things that a black bin back was required for the first time in about a year (I really do try to keep our general rubbish levels down). Do you do a Big January Clearout? It's incredibly cathartic, almost a meditative act if you don't go at it like a bull in a china shop, which only results in more, broken, stuff being thrown away. 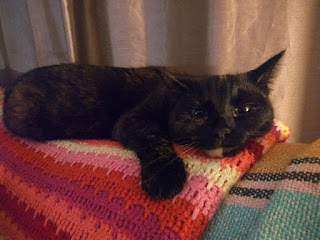 I'm no Marie Kondo (gods forbid) but I do like the process of opening a corner/cupboard/drawer/box and working through the contents one by one. Looking at them and recognising that, if they've been in there 5 years and never looked at, it's time for them to go. In my case yesterday, that was scraps of fabric, a box of rusty pins, varying lengths and tangles of embroidery threads, remnants of wool not long enough to make anything with, wrapping paper that was too creased and crumped and sellotape-marked to reuse, broken buttons and knitting needles, and other random items that I'd once thought would have a purpose but turned out not to have.

Where once there was an overspill of chaos and failed projects, there is now a contained order in labelled boxes on neat and clean shelves. It won't last but while it does, I go and stand in front of them every now and then just to appreciate the scene.

It's representative of the more ordered me I like to tap into every now and then. She doesn't make an appearance very often. 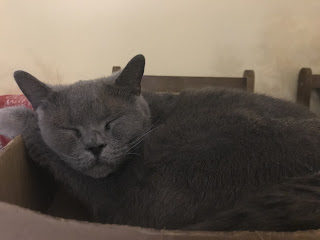 Just a happy Boo in his box.

Also on the agenda at the weekend was a visit to the wedding venue. After a false start with a place that looked enchantingly like an Ewok village but had no wheelchair access or facilities beyond some basic toilets, we finally hit upon a place that has enough of a Wild Place look about it for us to be happy.

As you can be sure there will be a lot more of that in the months to come, I'll leave it for the time being. Once we've got the Great Guest List Row out of the way.

Last night I started crocheting myself a hat. I've been at a bit of a loose crafty end since finishing the last Attic 24 CAL in time for my Mum's birthday back in December. I've taken the time to do some repairs (pockets in jeans, buttons on shirts etc) but my next crochet project (which I can't mention here in case they read about it) won't start for another couple of weeks. I'm not doing the CAL this year as I feel I need to use up the wool I already have rather than buy another big bag of more. 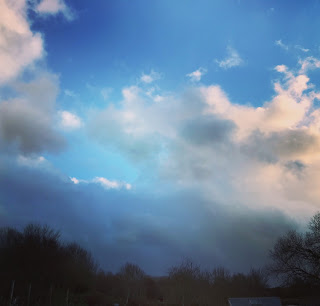 Glowering skies over the allotment

Plus my ears were really really cold when we were doing root cuttings at college last week. A fascinating process and I'm really hoping the phlox I used actually take. The soft-wood cuttings we did a few weeks back did very well until they did too well and I didn't pot them on in time, so they died. The leaf cuttings are just sitting there as if to say "What?", practically shrugging at me. I love the process of taking cuttings but I'm not convinced the plants are so keen.

Anyway, my ears were cold and I don't have a hat, so I'm making myself one out of fetching dark red wool that's quite fluffy and has a wee bit of sparkle in it. I was given the wool years ago, so it's nice to finally have a purpose for it.

In other news, I'm unofficially doing Dry January, alcohol being one of those inflammatory things that I'm trying to avoid, as well as Buy Nothing January, which is not something being marketed far and wide as A Thing, but the result of noticing that, really, I have everything I need, so why buy more? Honestly, I'm feeling very virtuous and smug about it all. Veering dangerously onto the path of Puritanism? Nah. Too many rules. Just an attempt to live more lightly on the planet. 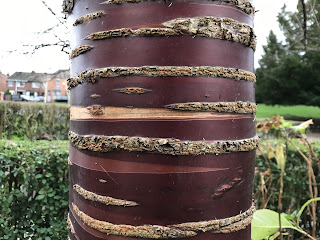 Took a walk in the park and successfully identified a
Prunus serrula (Tibetan Cherry) by it's bark.

I signed up for the George Saunders newsletter. Heard of him? He wrote one of my favourite books, Lincoln in the Bardo, a few years back and I've got his latest, A Swim in the Pond in the Rain, on order at the library. He releases an e-newsletter every week or so (if you're on the free list, which I am) and he set an intriguing writing exercise yesterday, involving a word and time limit. I may try it later this week.

On the subject of books, I read John le Carre's Call for the Dead yesterday, which was slim but excellent. It's interesting that as uninterested in the Cold War as I am, he can still draw me in and I'm a little in love with the shambling Smiley. And I'm also ploughing through Pandora's Jar, despite not being particularly interested in Greek mythology. But Natalie Haynes is a chatty writer and entertaining to boot, so it doesn't feel like a slog.

And here I shall leave you to return to some proper work. As much as I enjoy letting free a long stream of blather, there are things to attend to. As we plunge into the dark and rainy second week of January, I wish you all a good one. Hope it's full of warming meals, warming fires and warm toes. I'm off to throw a jacket potato in the oven. 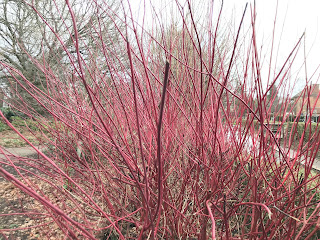