This month has passed in a flurry of things, not least of which was the return of the Kid from Sunderland. Sad as he is that the relationship has broken down, he's also overwhelmingly relieved to be back down here and away from what had become (as far as I can tell and I'll never be able to tell all because there are things you don't tell your mother) a pretty toxic situation.

So, for now, he is regrouping his energies, taking his Nan's dogs for long walks, eating better than he has in a year and studying while he waits to be able to start his new job. 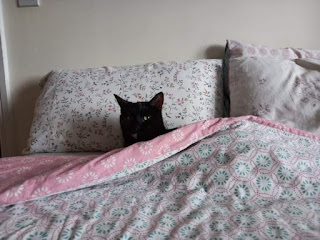 Tiny Wee Mabel spent most of the storm actually UNDER the duvet.
She has ideas above her station.

I had a fancy-pants night out at the theatre last week, to see The Play What I Wrote at Malvern. It was very funny but, oh dear, I’m guessing no one under the age of 40 would even know who Morecombe and Wise were, let alone get half the jokes. It did make me feel very old, even while I was laughing. And it was just lovely to be out with a friend, grabbing an early dinner and generally behaving like I was a Person of Culture.

Last Wednesday I was in Gloucester for an exhibition and a client meeting. Which was a success. I could hear my bank balance shouting hooray all the way over there.

College is has been interesting with bits about soil testing and taking all forms of cuttings: leaf, root, hard wood, soft wood. I think a lot of my dissatisfaction with it last year was down to my own physical limitations. At my own plot, I can take my time over digging and the heavy stuff. At college, you have an hour to double dig, so you have to crack on regardless. Of course, I could have told them but, frankly, didn't want to. 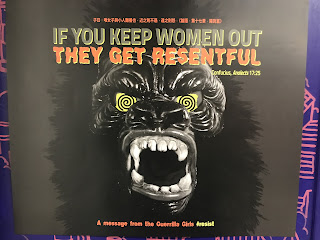 Guerilla Girls nailing it once again.

Speaking of physicality, I had my long-awaited MRI scan on my foot in January and then the consultant appointment yesterday. At which, as soon as I sat down, he pulled up the images and all but yelled "fucking hell, you have the foot of an 80 year old!" He didn't swear, obviously, but you can bet I did. Having that sort of thing said without any preamble is most definitely NOT a Good Thing and there was a certain amount of shock.

Next up will be a course of steroid injections and, when I reach the limit of how many you're allowed, an op to fuse the bones. It is what it is and there is, apparently (I asked), nothing I can do to make it better now. I think this will take some processing. 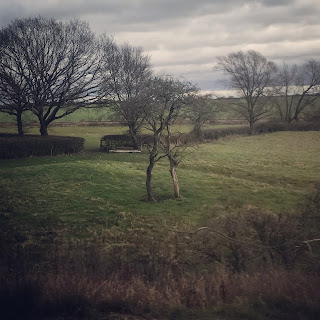 Trees spotted from a train. Are they dancing or gossiping maliciously
about the new sapling in the next field, who does she think she is, giving
that oak the glad eye? Ooh, I know, doesn't know her place.

In other news, I've been sowing seeds in my lunch breaks, which is an entirely civilised way of having a lunch hour, and storing them in our dinky new greenhouse. Or I was until the storms of last week nearly lifted the greenhouse off it's feet to see how it would fly. It felt a bit like that moment in the Wizard of Oz where Dorothy is clinging desperately to the house as it's whirled away. Luckily, N emerged from his office in time to hear my shout, so came to the rescue. We wrestled the cover into the shed and left the frame to fend for itself, which it did.

Unfortunately, the wind also rattled the shelves with such ferocity that the seed trays fell off. Result: a big yup of compost and mixed seeds on the floor. God only knows what will end up being planted and where. 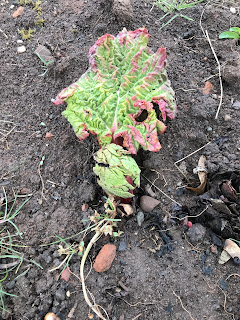 And that's the full extent of our storm damage; we really have escaped lightly. Up at the allotment this morning, all that was changed was the water butt - now lying on it's side - and a branch from the elderly elder was down. It was a mighty relief.

As was the sight of a brand new, crinkly rhubarb leaf in all it's glorious pink-green colour combination. There were green buds appearing on things, new raspberry and wineberry shoots, birdsong to gladden the heart and a little bit of sunshine to cheer everything on. All's not lost.