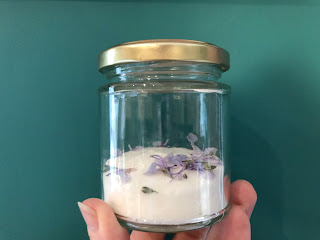 Caster sugar with rosemary flowers for which to make biscuits.
Not cookies, biscuits.
This afternoon, I am going to write for pleasure. This is after having spent yesterday trying to write for cash and failing miserably, (and having written most of this post TWO DAYS ago). Sometimes, I do not feel able to dredge up yet another metaphor for "this is a really good project! People will like it! Come ooonnnnn!" and yesterday was one of those times. Better to knock it on the head at 4 and take myself off to the allotment.

Where the rosemary is in full bloom, narcissi are springing up and there were ladybirds clustered around the new growth of the fennel. The skies were blue, the birds were singing, it was bliss. The woman who runs the nature reserve CIC on the site stopped for a chat, looking almost drunk on the swelling of spring.

"I'm not on drugs!" she proclaimed loudly. "It's just, in there, it's..." she waved her arms back in the direction of the wood and trailed off. "Just wow." Safe to say, her serotonin levels were off-the-chart high. I have rashly agreed to help write some funding bids so I now have to find new, unpaid ways of saying "this is a really good project! People will like it! Come ooonnnn!" but it's for a good cause, so I don't mind that.

After she'd gone, N and I dug and raked for a while before calling it a day. I was extremely pleased to find my arms still working after the weekend. For the new wardrobe had arrived last Friday and the long postponed redecorating of the Retreat got underway.

There was a day of painting, a weekend of construction and a further day of finishing touches. And my arms, oh those poor arms: I wasn't able to do anything with them other than flail around like Father Ted and his fake arms for at least a day.

It was exhausting, and not exactly the fun weekend the Kid had in mind when he came to stay and found himself deputised to holding important pieces of the new wardrobe while N cursed and drilled and banged, but it is done and I'm so pleased with the result.
The walls glow like apricots in Mediterranean sunshine, the space where I work is screened off from the spare bed by a bookcase, meaning I no longer look like I've rolled out of bed and straight into a Zoom call. Well, I do, but that's more a matter of unwillingness to use a hairdryer than it is to do with the fact there is a bed in the background. I keep leaning to one side so people can clock the improving titles on the shelves behind me and be suitably impressed. 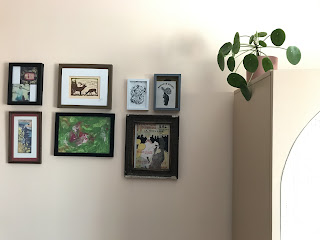 Part of the finished (almost) room. That green
painting, bottom middle, was one the Kid painted when
he was small.
N's Mum is finally out of hospital. I didn't mention this before as, until we knew she was going to be okay and home again, it wasn't my place to. She was in for 8 days after a series of falls that no one was quite sure of the reason for. Was it her MS, or maybe mini strokes, or - oh no, there it is, dehydration. So easy to dehydrate when you're elderly, disabled and the idea of having to hoick yourself around is frankly exhausting, how much easier to refuse that cup of tea, ignore that glass of water. I know my Nan often did the same thing.
Anyway, she is better now and back home with a full care package that has been much needed but not set in motion before because his parents are quiet people who do not want to make a fuss or be a nuisance. And the quiet, no-nuisance people always fly under the radar. It's been a worrying time.
In the greenhouse, seedlings are unfurling ever skywards. Rocket, cabbage, cauliflower, lollo rosso, sweet peas and other flowers, spring onions. There are even 2 tentative tomato shoots. On the windowsill, a new batch of seeds are beginning to germinate, including radish, parsnip, dill, basil, courgette and, rather exotically, luffa. Oh yes! This year I am going to try my hand at luffa growing, then I shall have a ready supply of scrubby cloths. Will keep you posted on that progress.
Tiny Wee Mabel is also infected with the joys of spring - we've barely seen her for the past few days. She comes in, shouts, eats, leaves. Eventually returning late at night to sleep. The fox sounds have died down now and there have been limited sightings of the evil tabby who used to persecute her, so she's making the most of it. 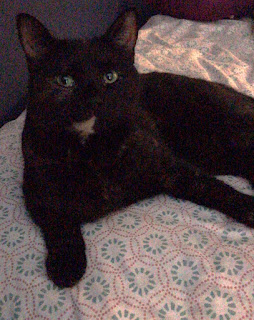 Tiny Wee Mabel: slightly boss-eyed,
extremely shouty
The Great Boo, on the other hand, has taken no more notice of spring than he did winter. Still sleeping in the radiator hammock, still sitting silently by his food bowl and attempting to look half starved, still regarding Outside with suspicion. The only change has been that he now sits on the lawn and occasionally we hear a small thud which is him smacking at tiny flies in the grass.
The sky is bright again today. This morning, awake very early, I decided to take myself off for a walk. Unsurprisingly, my footsteps took me along the canal where the birdsong was a delight. Standing there for a few minutes, no one around but the woman failing to bring her spaniel puppy to heel, I could quite understand why you feel a little drunk after a day spent in the middle of it.
Sadly, that wasn't to be. I've been back home and ploughing through my to do list since 8am. Feeling like a 4pm knock-off is in order. 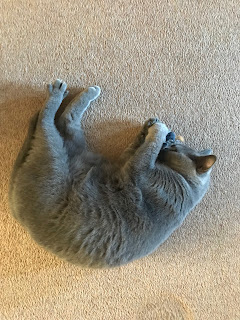 The Great Boo: off his tiny rocker on catnip
Oh, I've just read that Dagny Carlsson, the world's oldest blogger has died at 109 (you can, if you can read Swedish, read her blog here). I love that she was referred to as a 'blogger and influencer'. Better her than one of the Kardashian nitwits. I wonder if I'll still be blogging at 109? What a thought to start the weekend on!
- March 25, 2022

Email ThisBlogThis!Share to TwitterShare to FacebookShare to Pinterest
Labels: allotment, along the canal., good news, home, life, Me & Us, Spring