As you may remember from some posts ago (helpfully signposted by this 'ere blue linky), I have had eczema for a number of years now. It's appearance was gradual and spasmodic for a long time, lulling me into a false sense of "this is manageable" and "if I just cut out cheese, that will cure it".

Friends, it has been 7 years. There is only so much Stilton this woman can refuse in her lifetime.

Over those years, I have run the full gamut of interesting remedies in an attempt to look less like I have some disfiguring, contagious disease. There was the black clove oil that was recommended as a drink or topical application. As a drink it made me boke; as a topical application, it sent me shrieking to the bathroom for the soap. There was the giving up cheese, then all dairy, then bread, then all wheat and gluten, then sugar. My poor family, never knowing what to serve me. I was the worst dinner party guest.

N gave up cooking altogether because he was afraid of making it worse. And if you're wondering how hard it is to quit sugar, let me tell you: bloody hard. It's in everything. It's even in mayonnaise! And gluten-free gravy granules! By all things good and righteous, when has gravy ever needed sugar??

Then there was that month where I tried the SIBO diet (I'm not linking it because it's EVIL) and spent the final week of it eating crisps every night and weeping on the sofa because it's so sodding restrictive and joyless. The Cambridge diet is a barrel of laughs compared to that thing.

I tried acupuncture, going to see a very nice woman who held my hand, listened to my woes, told me my adrenal gland was out of whack and then stuck some needles in me. It was very nice, like a therapy session only pointier, and I did enjoy the massage at the end, but it cured nothing.

There's been over the counter remedies, under the counter remedies and remedies that look like they've been scrapped up from the floor behind the counter. Try this cream! Try these herbs! Try this meditation! When I finally braced the Guardians of the Diary, the Gatekeepers of the Knowledge, i.e. the bulldog-like receptionists at my local surgery, I had a telephone appointment with a doctor who sent me a steroid cream.

Fine, fine, I'll take the damn steroids. And I dutifully applied it.

Woke up the next morning and thought, "gosh, the world is very blurry", looked in the mirror and promptly screamed, scattering the cats and setting off car alarms all around the city. I'd woken up with eyes so puffy, I was viewing the world through 2mm slits between my eyelashes. I looked like the Stay Puft marshmallow man in Ghostbusters, but with breasts and towering peri-menopausal rage.

A panicked call to the Guardians later, I was on the phone to another doctor who laughed, LAUGHED (did I mention the towering peri-menopausal rage?), told me a reaction to the cream was highly unlikely so it was probably hay fever, but he'd send along a prescription for the gentle 'baby' version of the cream. Are you surprised when I say I did not get that prescription filled?

Failed by modern medicine, I went back to the Quacks. I think it's safe to say that, by then (2021), I'd run a marathon of quackery and, because a lot of the this damn stuff was on my arms and face, considered having cards printed saying "this is eczema, not leprosy. You are safe to approach" that I could hand out to people in the street to prevent the screaming whenever the wind blew my fringe off my face. I cut a deeper, thicker fringe. Considered hats.

Then there was the very nice nutritionist who talked a lot about gut health, made me have expensive blood tests and then got me to buy expensive supplements that made not the blindest bit of difference.

I chickened out of booking a course of sun beds (another suggested cure, something to do with the UV light), I must confess. I meant to go but was completely intimidated by the people manning them. The mahogany glaze to them. The terrifying fingernails. The, oh my dears, over-emphasised eyebrows that seemed to waggle independently at me, signalling that I was out of my depth. The eyebrows don’t lie.

I have avoided totalling up how much this, this, nonsense has cost me. The endless creams, the dietary alternatives, the appointments with specialists, the supplements, and the end result has been a savings account that echoes and skin that still frightens the horses.

This year, I said to N, I'm stopping this. I need to take a break from it all. This is more than one woman can manage, and this particular woman has had it up to here with other women in health food shops putting their heads on one side and saying "has madam tried this supplement? It's only £45 and your soul for 2 capsules? You need to take 4 capsules a day in water that's been collected under a full moon from half way up Mount Kilimanjaro - the water is not provided, you'll need to gather that yourself. We have an offer today: buy this and get a life time's worth of anxiety for free!"

Up with this QUACKERY I will no longer put.

Oh, except for this place, this Chinese herbalists, which has had some great reviews, so I'm going to give it a try. This is my last quack of the duck, if you will.

And that is how I ended up in a room filled with disturbingly detailed anatomical drawings, listening to some truly dreadful "relaxing" music (the CD gets stuck and judders at the same point every week, and I'm forced to listen to the sound of the recorder ddd-dddd-ddd-ing for 30 seconds until she gets up and thumps the CD player) while a woman sticks pins in me and then trains a heat lamp on particular spots. She asks me nothing about what I eat, is utterly unconcerned with any stresses I may have experienced and makes no attempt to jazz up what she's doing. She flicks the needles in with the casual skill of a professional darts player.

It is practical and, I cannot tell you, a huge relief. Her whole attitude is one of "yep, seen this before, get up there and let's get on with it."

Then I flip over (I say flip, what I mean is that I roll over with the grace of a beached whale and try not to fall off the table) so she can practise the mysterious art of cupping. No, NOT that sort of cupping - get your minds out of the gutter - but the sort that people like Gwyneth Paltrow used to have done. Did I say I was done with quacks and quackery? It seems I have actually decided to go the Full Duck.

At the end, she pummels me for 10 seconds in a brief, non-relaxing, massage, charges me an extraordinary amount of money, and sends me away with parcels of tea that look and taste like rotting undergrowth. I swear it is the same smell you notice along the canal in the depths of a damp winter.

And what's my verdict after 4 weeks of going the Full Duck?

The eczema on my face and scalp has gone. Completely vanished as if it had never been there in the first place. The stuff on my arms, back and knees is still lingering, reluctant to leave a party no one invited them to, but the areas are reduced, not quite so red and angry. I no longer have to hold my hair in place, like a man with a comb-over in a high wind. People no longer recoil in the street. Small children no longer cry when I look at them. Dogs no longer howl and flee. Birds sing and my life feels less like one angry ball of itch.

Still angry, but without the itch. Bring out the Stilton. 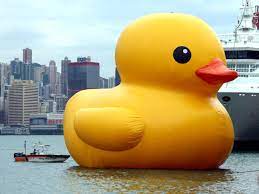 Earlier this week, as I sat in the quiet cafe, music playing quietly enough for me to ignore it and, on the yellow formica table top in fron...