Well hello there! I woke up this morning, at the reasonable hour of 6am and decided that today is a day I write. This is the most joyful thing about working for myself: I can make that decision. And, as I put in some hours at my desk on Sunday while the football was on, I can do that with a clear conscience.

This morning I had time to do a quick Spanish lesson, followed by a Scottish Gaelic one. Five minutes of each, via Duolingo. I've been doing the Spanish, on and off, for about 2 years or so but the Gaelic is new and I'm doing it simply because I like the idea of it. So far my favourite word has to be 'snog'. Pronounced snok it actually means 'nice'. Which snogging is, so it all works out.

My favourite word in Spanish? Esta aqui. Which means 'is here' and feels very grounding. I also like that the 2 can be smashed together: esta aqui snog. Here is nice. 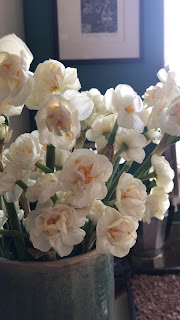 I've also started doing some exercises I found on the Versus Arthritis website. These are stretches and there are ones for specific areas of the body but I tend to stick to the morning, day and evening sessions. 15-20 minutes, whatever time of day I chose, to keep things moving, muscles supple and joints lubricated (isn't lubricated a dreadful word?). Today, I did the morning ones and then headed for the kitchen feeling in the mood for muesli.

This I make myself: oats, seeds from pumpkins, sunflowers and poppies, raisins, ginger (good for inflammation caused by arthritis), topped with grated apple and zapped in the microwave for 30 seconds because I don't like cold milk. Do I feel impossibly smug about my virtuous breakfast? Why yes. Yes I do. And should the rest of the day go to pot and I finish it by eating nothing but toast, no matter. I'm ahead of myself.

Mornings and evenings also involve a dose of swamp juice as prescribed by the no-nonsense acupuncturist. Bless her, she describes it as a little bitter. A better description would be "the cocktail I'll be served when I'm in hell". I follow it with a peanut butter chaser to try and neutralise it. 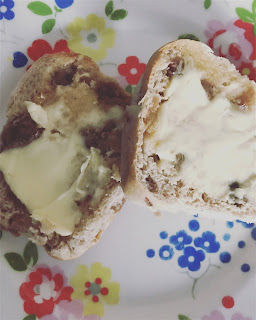 Nice too? The first hot cross bun of the year.

Last night, we finally managed to catch up with the latest Stanley Tucci episode. Oh my. The urbane coolness, the suavity and understated sexiness of the man. And Italy, although Italy's sexiness is more one that flaunts itself with deep eyes, lowered husky voice and suggestive finger running up your forearm. Oof.

They are a TREAT and I'm spinning out the series for as long as possible. One episode a week least I binge and wake one morning to find myself miraculously conceiving a small child with serious glasses, crisply pressed shirts and a knack with a negroni.

If you haven't seen them yet, do. But have something delicious to eat at the ready because you will get hungry.

Always late to a party, I finally got round to reading Normal People at the weekend, having avoided it for a long time on the grounds it was about Young People being young and sexy and I couldn't muster the energy for it, let alone feel like it had anything to offer me.

Except that it did, of course. Rooney lingers with exquisite precision over the tiniest of details, the cup being placed back on its saucer, the strand of hair, the muted clap of a laptop shutting. Everything is understated but positioned Just So, each word placed carefully. But that's not to say it isn't compelling or that the pace is too slow. She moves it forward, keeps us moving and growing with Marianne and Connell and leaves them at just the right moment. Not perfect, but as near dammit as I've read this year.

Brace yourself for my hot take on a different bestseller from 6 years ago next time. 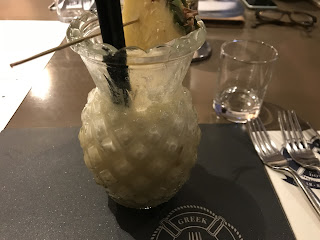 And surprisingly nice? A 'virgin' pina colada at a fancy-pants night out for
International Women's Day last week. It was like a pudding in a glass.

The wedding invitations are finally complete and at the printers as I type. There has been the usual faff around timings and what to put on the insert and who, of the extensive guest list, we can actually fit into the registry office. I have come down hard against inviting random old friends of N's parents who he hasn't seen for over a decade just because they were at his brother's wedding. And he has come down hard against my nonsense about time and need to be everywhere FIVE minutes before the start.

Mum is fighting against children being invited (I think she had a bad experience at her own wedding), but we have so many friends with kids, that it seems a shame to ban them and aren't weddings all about family anyway? Besides, parents I know with kids will be overjoyed to have a legitimate reason for a night off and will be unlikely to bring the little treasures along with them. Mum and I are taking a trip to Brum Rag Market in April to buy the fabric for the dress, which will be a relaxed experience in no way ending in a row.

It will totally end in a row.

N and I have both come down hard on the subject of presents. A plus of marrying at this advanced age is that we have enough of everything. We have no need for matching etched wine glasses, plates, bed linen or matching dressing gowns. We have enough cutlery, mugs and cushions to see us through to the next world. Anyone buying us a "Live Laugh Love" sign will be banished to the cold outer edges of our circle and then get it gifted back to them at Christmas. So we've opted for donations instead, splitting it between the MS Society and Medecins Sans Frontiere.

As I type, the utterly, breathtakingly, wonderful news that Nazanin Zaghari-Ratcliffe is at Tehran's airport, allowed to fly back to Britain, has come up on the news. After so many years, this is an incredible piece of good news and a true ray of light on a very dull and rainy day.

Which is a good note to end this post on. May your Wednesdays have rays of light too. 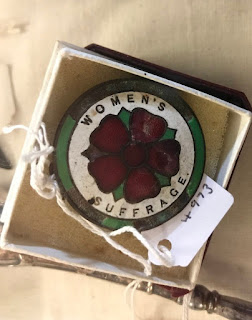