July at the Allotment 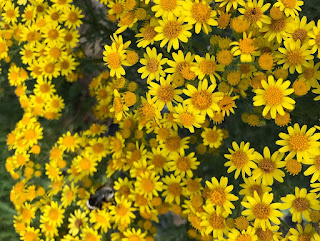 Gracious, it has been a week since those dog days of oppressive heat and unforgiving sun, where N and I took to hanging damp towels in front of open windows and, at the worst points, putting even damper towels over our heads. We may have looked all kinds of ridiculous but, as we never left the house past 10am, no one was any the wiser.

Do you know what has been absolutely loving this heat? The sunflowers. Yes, they have finally taken off from the thin spindly, slug bitten things that they were and are shooting skywards (you can see a video of their progress on my Instagram feed (pretty much the only social media I engage with now. Does Blogging count as social media? It feels too measured for that. Anyway, back to the point...). All they needed, it seemed, was a solid dose of Mediterranean temperatures to set them on the right course. It's quite reassuring to see, although I have been researching emergency florists just in case.

The courgettes have recovered from a similar case of slug attack too. They were nice and healthy when they went out; a day later they were stripped of all but one leaf. It's incredibly frustrating but other plot holders tell me I'm not alone - slug levels have been off the slimy record and we're all grasping at coffee grounds (the one I have had most success with), copper tape and wool pellets. There are slow worms on the site but it seems there aren't enough of them. I really must get my pond dug and frogspawn transplanted when the time is right.

I'm reluctant to bring in hedgehogs as there are badgers here, and badgers eat hedgehogs (true and disgusting) and I don't think I could bear to be responsible for that kind of massacre.

BUT, there are signs of balance. I've seen more ladybirds on the plot this year, keeping aphids under control with no intervention from me. Chives have seen off the white and black fly from the beans. I keep a shallow dish filled with water to encourage birds down. Crickets scatter as I walk, so I know they're around picking off pests.

As usual, my low boredom threshold for weeding means that there are "wild flowers" galore, so the bees and butterflies are out in number, which is just fun to sit and watch. It also means that the ever present bindweed is really flourishing in parts, but I like to let that get to a decent length and then pull it out of the ground like spaghetti from a carbonara.

The potatoes are nearly ready, I think. I'll be lifting a few at the weekend to check. The beetroot are slow but that's my fault for the late sowing which has meant the ground has been too dry to plant them out. The raspberries are mainly autumn fruiting but a few are already ripe, albeit small through lack of rain. These I pick as I go, handy snacks rather than a crop I make plans for.

The Japanese wineberries are also looking ready to burst from their strange, sticky cases. They made a superb jam last year, but I'm not sure I'll have time to make jam again. Too much to do in the run up to September. Maybe a flavoured gin that can quietly steep while I'm busy and then be handed out to everyone who helped with the wedding?

I like that idea. I also think gin will needed.

In August, I'm going to order in a heck-tonne (an official measurement) of topsoil and compost so I can finish off the last 3 beds in the no-dig fashion. N has, reasonably, pointed out that digging through the accumulated nonsense - accumulated by previous plot tenant - absolutely breaks me, takes months and actually depletes the soil in the long term. He is not wrong, which is annoying. And I find that, in my 4th year of plot ownership, my enthusiasm for digging up that nonsense has decreased considerably. The arthritis makes progress slow and dispiriting, so better to try another method than involves no more than cardboard and a hefty topping of topsoil. Which I asked for for my birthday.

The brassicas are HUGE now, having recovered from their dodgy start. N built me a new cage for them from bits of the fallen fruit cage, scaffolding netting and drainage tubing. They now have even more room to shoot up. Extra bonus: the netting is yellow and the pipes blue, so it’s a very colourful cage.

I managed to put my back out slightly, lugging a half-full water butt into a new position. Annoying as it meant my planned 2 hours at the plot were curtailed by 40 mins so I could go home and lie down till the agony passed (it did) but also, hurrah for another water butt!

This year is the driest I’ve seen the allotment. We haven’t had a decent rainfall for months. The canal level is low and a hosepipe ban is lurking just around the corner. Of lot of plants, under stress through lack of water, are throwing seed out early. The clay soil is crazed with deep cracks where it’s shrinking back on itself.

There have been a few half-hearted attempts from the sky to throw some rain in our direction, but mostly it evaporates in the sky, or gets lost somewhere around Wales. Trying to weed or plant anything is like chipping away at plaster, so I have a number of plants in pots, waiting for the right time to go in. So we just have to hope August is a little kinder.

At home, the garden is just about coping. We've lost more plants to the local fox family coming in and scent marking their way around (goodbye thyme, dwarf acer, ferns) than we have to weather conditions. Although the honeysuckle has never really enjoyed life here. The lettuces did lay down and die but the tomatoes are loving this, even though we are using grey water to keep them refreshed.

Let's just hope they don't taste unusually fragrant when we come to harvest them. 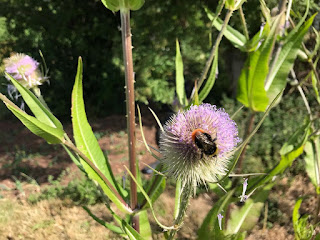 Last week, I was mostly being 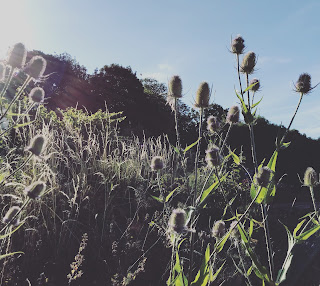 Poleaxed by my thyroid.

I’ve had an under-active thyroid for about 10 years now and mostly, I don’t notice it. I takes me meds and goes about me days.

So much so that I’d forgotten how it feels when the drugs don’t work. Or, more accurately, when the levels need adjusting. Just a tiny 25mg boost, the smallest of tablets, easily lost under the microwave or in the toaster as it pings out of its casing when the wrong amount of force is sleepily applied while the cats wind around my ankles, wanting to know why breakfast is taking So Long.

When the levels are too low, I achieve a state somewhere the other side of tiredness. I jokily call this my dormouse condition after Alice's sleepy Wonderland dormouse but he's positively the life and soul of the tea party in comparison

A lethargy wraps itself round me like seaweed. Every moment requires an extra effort as though I’m wading through water, chest high against a tide. Steps are slower, movement languid. I’ve been known to sit down abruptly in the middle of a downward dog, or belly flop out of a plank, just resting, resting, until I admit defeat and roll up the mat.

And my brain slows accordingly. A simple “thank you for your email” email (because we do like to clutter our virtual correspondence with false gratitude) seemingly takes forever as I wait for the words to travel their long way down from my brain to my fingertips. And then I delete it because it doesn’t read how I imagined it would. Try again. Coaxing some fabrication of work from me.

This is not any brain fog, this is a brain pea-souper.

And I sleep. Oh, how I sleep. Hours lost in a weighted, dreamless state. In bed, on the sofa. Once, I woke from a shavasana pose on the yoga mat. On another memorable occasion, with my head on the back of my chair and overdue attendance at a Zoom meeting.

There’s no warning to this sleep, no yawning, no eyelids growing deliciously heavy in the heat of a summer afternoon. This sleep clubs me around the head, knocks me out even as I think “gosh, I feel a little ti...”. The sounds of a busy city don’t even begin to penetrate, N could start up a drill in the room next door, marching bands could pass by with beating drums. I blink once, twice, gone for 60 minutes.

Abandoned is my usual practice of  "don't just put it down, put it away" (my Canute-like effort to keep the rolling tides of clutter at bay). Bags slump from shoulders, papers flutter to the floor in a breeze and are left there. The very act of opening the dishwasher to put a mug in feels like a Herculean effort, so I don't make it.

And clumsy! Even by my usual klutzy standards. Last Wednesday I dropped my glasses, picked them up only to have them slip out of my fingers, picked them up again and managed to hold onto them until they reached the table, where I put them down and...they promptly fell off - twice - because I misjudged the placing. Fragile items are moved carefully out of my reach and I am banned from ladders.

Luckily, my meds were upped on the Thursday, in time for my birthday weekend. The energy returns overnight and I'm able to cook, put things down without dropping them, walk to the allotment without tripping over my own feet. Make it through a work day without my eyes closing.

You can imagine the relief at being able to function again. Piles of things (okay, mostly my books) have been tidied away, rooms cleaned, washing done and emails whizzed through. I managed a full yoga session. Booked Eurostar, more doctors appointments, a cottage up north, cat sitters and meetings. I cleaned my desk, wrote a schedule, trained some people.

It's been like Mary Poppins without the disturbing chimney sweeps and trippy animation.

Sleep occurs at the proper times and I wake feeling refreshed rather than as if I've been clubbed over the head. To sit up straight rather than wanly slumping is to feel a renewed vigour. I terrify clients with my energy and effectiveness.

I weed, hoe and plant out. Carry full watering cans to the sunflowers, strim back the impudent nettles. And then I sit down, look around me and think "what can I sort out next?"

It's good to be back. 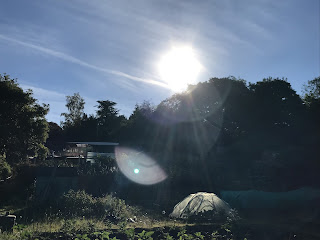 I don’t often bake these days. Whilst being an enthusiastic supporter and consumer of baked goods, there just isn’t the call for it in our h... 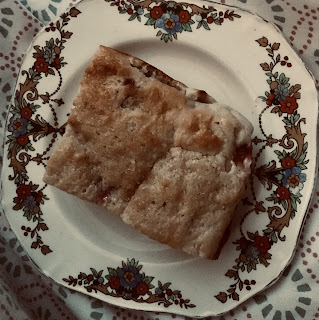