Into the August Mix

So far in August, apart from staring glumly into our rapidly emptying water butts and asking each other who's turn it is to cook ("I'm sure it's your turn", "Can't be, I did it last night", "we had sandwiches last night", "yeah but I made them", "that does not count as 'cooking'" and so on until we agree to have sandwiches again), we have enjoyed the simple pleasures of a drought and a looming wedding.

I have discovered that swimming at my nearest salt-water lido early in the morning is a delicious, if breath-sucking, thing indeed. The birds are still yawning, the trees cast elegant shadows over the pool and lawns. Swimming capped ladies of a certain age, knobbly and soft with life, bob alongside each other, chatting. "I told him, it's no good you saying that Steve will fix the tap, we've seen hide nor hair of him for weeks; he'll only show up again when his latest fancy piece kicks him out." "Ooh, you never said that!" "I did, I'll not put up with idleness."

Afterwards, I reward my fortitude with hot chocolate and a toasted tea cake. Sometimes I go in the evening, a welcoming cool down, but the conversation isn't the same - it's more likely to be that Steve and his fancy piece, plus approximately 5 billion kids and a similar number of teenagers casually trying not to catch each other's eye - and the cafe is closed. 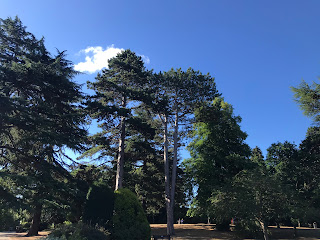 Trees at the Lido park

Bridesmaids dresses have arrived and are hanging in my wardrobe ahead of the Big Try On. A froth of netting, embroidery and chiffon, with a sprinkling of sequins, in blush pinks and creams. I can't decide if it looks like a cupboard some sinister fairy Bluebeard would have, or as though Tinkerbell sneezed in there. Either way, the nieces will look twirly and special on the day, which is all they're really worried about. I have threatened both nephews with a lovely peach satin page boy outfit, complete with dicky-bow, as spotted (and photographed for future sartorial threatening) but am graciously holding back on that reality.

N and I have started a new Friday ritual where we go for a walk somewhere lovely and rural. After the other week's epic, uphill, flying ant experience, he picked a woodland walk that was on level ground and didn't take 4 hours. It was pleasant, a woodland I'd not visited before, and cool under the shady trees. Huge dragonflies zoomed around a clearing we stopped in for lunch, and there were dozens of butterflies leading the way along the paths. We're undecided about this week - part of me has given a small sob at the thought of 35 degree heat - and may decide to be sensible and forgo it until the following week when it is a sensible 22 degrees and I can move without melting. 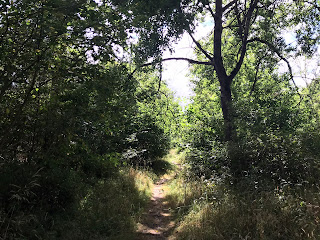 A walk that didn't make me feel like my lungs were about to fall out. Still nice though.

There's been a new addition to the family this week. Well, 3 new additions. Earlier in the year, I'd pointed at the shubunkin in the pond and said, "that one looks pregnant," which N had scoffed at until Monday when he spotted 3 very tiny shubunkins flitted between the reeds at the shallow end. Babies! This is very exciting and has resulted in much peering over the edge and trying to spot them again. The other fish are too taken up with clopping at unwary flies on the water's surface to bother them now.

We've also had our first ever dahlia success. Having been handed a bag on anonymous tubers and the vague instruction to "plant them in the spring", we weren't really sure what we'd get. Was it even a dahlia? I'm pleased to say that it was and that they are beautiful. Tiny wee firecrackers of colour, just as the nemesia are giving up the ghost. I can't go out and photograph them for you right now as I'd burst into flames.

The Kid started a new job this week. After 4 years working in care, looking after adults with physical and mental disabilities, before, during and after the pandemic, dealing with an increase in aggressive behaviours during the lockdowns, struggling on the minimum wage. Excuse me a small amount of anger, but all that clapping resulted in absolutely zero in terms of better wages or better working conditions (fancy a 12 hour awake-all-night shift followed by a 3 hour 'essential' team meeting anyone?). 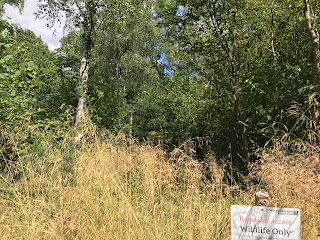 All the most intriguing paths were strictly non-humans only

Anyway, he now has a job at the lovely Pitt Rivers museum in Oxford, long one of our absolutely favourite places. When I asked him how it was going, he said, in a tone of great wonder, "I can walk into the research room any time I like". Which pretty much sounds like the dream to me.

We have a trip to the sea coming up shortly. Not having seen our friends in the north for nearly a year, catch up is overdue. After my quick solo break in May, I made a resolution that we would get away more and remember to tell N about it as my finger pressed "BOOK" on the next break. We're going to see Lindisfarne, Bamborough and Alnwick, because he's seen none of them (he hasn't lived!) and then we're having a massive gathering of the clans, plus quiz, food and cake. I Can. Not. Wait.

Today I did something I've never done before...I complained about a school. Bear with me. I'd been thinking about it for the past 2 weeks, but shied away as I'm not, by nature, a teller of tales or caster of stones. However, after the 4th incident of finding the grammar school were using a sprinkler on their goddamn CRICKET field, I properly lost my temper and did it before I could calm down again. I was, I think, calm and polite, yet unequivocal in how that's really Not On. So there. I am now one of Those People, who write do-gooding complaint letters and twitch their net curtains and write down reg numbers...actually, I draw the line at the last unless a Proper Crime has been committed, however badly the woman at No 1 chooses to park. 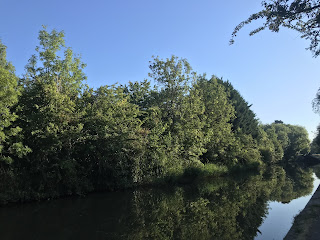 The canal at 7am. Gorgeous and shady.

So I am a snitch but we are hours away from an official drought announcement and subsequent hosepipe bans. Some places are without water already. The allotment ground has cracks in it wide enough for a finger to fit in. We slop grey water from the house to the garden. Everywhere is tinder-dry. Whole crops have been lost and farmers are caught between a drought and a Brexit. Now is not the time to be scattering water like so much privileged confetti.

And if they can just wait till Monday, there shall be rain enough to green their pitch.

This morning I harvested a lot of wildflower seed heads from the allotment, so I can spend this afternoon decanting the seeds into tiny envelopes for our wedding guests. Some people pick sugared almonds (although why? Those things are harder than the science questions on University Challenge with Jeremy Paxman yelling "Come ON!" after 2 seconds); at my cousin's we all got little Burts Bees lip salves and hand creams, which was sweet. I like the idea of wildflower seeds though, and even if all they do is throw them away (as happens so many wedding favours), the seeds will still find a way. So if you'll excuse me, I need to get my shaking hand on.

Have a splendid weekend, everyone. Hold on in there, rain's a-comin'.

PS, I'm trying not to bombard you all with too much wedding talk, but it has to be said, the damn things take up a lot of time and attention. Tell me if you're bored and would prefer my hot take on the Tory leadership race. Although no one really needs that.
- August 12, 2022