Two Go To An Island

Oh Lindisfarne, you are so beautiful and strange. Driving over the causeway, a mild frisson of fear that maybe you've got the tide timings wrong, and the sea is going to come rushing at you as you get halfway, is always something special. The vast flat expanse winks with shallow saltwater pools as you cross. One day, I've promised myself, I'll do it by foot to get a real idea of what it would have been like, back in the 7th Century, to undertake that crossing. A leap of faith that even I, a faithless person, can appreciate the magnitude of.

Whizzing across on tarmac just doesn't contain the same profundity.

And once across, everywhere you look, that shimmering North Sea surrounding you, the air full of gull cries and oozing seaweed smells. Boats lean drunkenly into the sands, lobster pots sink into each other with resignation. Years ago, when I first came here, there was a sandwich shack selling fresh crab sandwiches. I couldn't see one this time around.

There was also that strange glitter in the eye of residents, a twitch to the professional smile, that indicated they were, at the end of this long summer, coming to the end of their patience. It's a look I recognise. It's a look I once had. It states very clearly, to those in the know, that the person before you has dealt with approximately eleventy-billion people asking the same damn silly question about the tide/Vikings/whereabouts of ice cream/Lindisfarne Gospels/insert own tic-inducing question.

Like a parent of small children, they will have been repeating the same information/issuing the same demand (do not feed the dog pickled onions! Yes, you have to get across before the sea starts coming in! Do not put your sister's fingers in the electric socket! No, you cannot eat ice cream in the museum!) since time immemorial (or, generally, since around March when the weather starts to get a bit nice and people think they'll start taking trips again) and they are oh-so-tired. 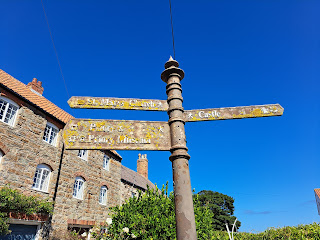 To wit: the exchange I overheard in the Lindisfarne Gospels shop and experience entrance, where we'd gone looking for a bit of Viking history on the island - everywhere else having been a bit light and sniffy on the subject.

"So, these are the real Lindisfarne Gospels in here?" asked a very English woman (no, not me) as she clutched her battered debit card (a day on this island is an expensive day) to her quaking bosom. Bravely asked, I thought, having recognised the glaze and twitch of the stout woman behind the counter and also having clocked the sign outside that said 'replicas'. There is an intake of breath and, as one, the entirety of the population in that space, including me, leaned forward for the answer...

"NOOOOOAH!" Came the roar of a woman asked that question just once too often in a 24 hour period. "Those are in London [she all but spat the word]! These are REPLICAS, like it says on the sign! But you can see allll on 'em pages 'ere. You can't in LONDON!"

At which point, I quietly put down the postcards and headed outside so I could laugh without having a replica holy book thrown at my head, so I missed finding out whether the customer paid up and went in anyway. I suspect she did. It's what the English do. 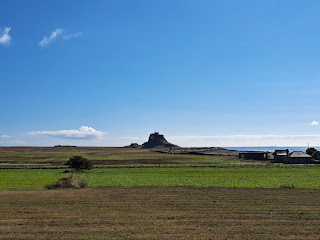 And where was N? Leaning on a wall outside, eyes closed and wishing he was in a pub after having suffered through the castle and then the priory. To be fair, he enjoyed both but his stamina for old buildings and epic vistas is not quite as well trained as mine. I'm working on it. By the time we get back from Bruges later this year, he will also be able to show unlimited enthusiasm for flying buttresses and an unflagging determination to see one more gargoyle/Medieval masons mark. Or I'll have completely broken him and he'll refuse to go anywhere with me ever again, preferring to whimper quietly on his own at home, rocking gently back and forth, whispering "please don't tell me again why the Dark Ages is a misnomer". I'd say we're at the 50/50 possibility mark of him going either way at the moment.

ANYWAY, back to Lindisfarne. The castle is a stunning piece of architecture and has been nicely done up by the National Trust who've employed their now-standard method of interpretation, printing bits of letters and diaries on to unlikely places. Here, their focus is on the early 20th Century and the members of the Bloomsbury Group who came here, particularly Lytton Strachey, who could be a bitchy little number when he wanted. I always wonder why people invited him anywhere. But there he is, snarking all over a tablecloth or a coat, wittily snarking no doubt, but snark nonetheless. He'd not have got to pudding stage at my house, much less been allowed to stay for weeks as he did here. 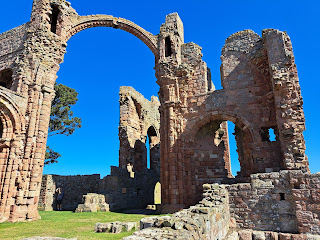 But it is charmingly done, and we enjoyed it, although we (I) lamented the lack of information about residents and owners pre-1800 about from one timeline. We also enjoyed the sight of the staff running around like startled chickens when the fire alarm went off. The newest and youngest member of staff, poor lad, repeatedly asking his walkie-talkie "is this a fire alarm?" as if it were some sort of Delphic oracle. As both N and I have health and safety training under our belts and were the nearest responsible adult to him, we informed him that, yes it was a fire alarm, and his procedure right now should be to evacuate people. Yes, even the old lady determinedly doddering off in the wrong direction.

On second thoughts, maybe never invite us anywhere? We can risk assess a scenario in our sleep. We are the most fun at parties. But at least you'll never be sued over a trip hazard.

Luckily for all, it was a false alarm caused by someone vaping (what is the matter with these people?) under a smoke detector, and we were able to troop back in after a half-hour wait surrounded by glorious views. Quite the nicest fire alarm evacuation I've ever been involved in. There was much rejoicing when the all-clear was given. 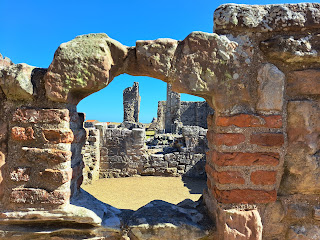 Then to the Priory, which contained a nice line of simple, hands-on activities (fit the task into the slot) for kids (and me), some nice finds and the most glorious architecture. That's really what you come here for. The sight of those towering arches, the broad sweep of the walls, the expanse of what would have been windows looking out over the sea. You can imagine easily how it would have felt to see these strange ships appear on the horizon, land. Those strange men in their furs, armed with axes that would wink maliciously in the sun, a completely pitiless band of warriors. Would they have been silent, or howling a war cry to the skies as they made their way up the dunes?

I couldn't tell you because there is No Viking History on the island. Despite the Vikings definitely having made history here. It is very strange. I've been told several times that I should go to Yorvik in York for my Viking fix. But I have been there and I have no need to see freshly-graduated students, the ink on their acting degrees still wet, stomping around the entrance asking "do ye be a witch?" in cod-rural accents ever again.

Regardless, Lindisfarne is eerie and beautiful, strange and glorious all at the same time. I wish I could be there in winter, watching the storms rage around the ruins. One day. Maybe. There are other places to get in touch with my Viking ancestry after all. If I really wanted to.