As previously mentioned, N and I took a trip up to Northumberland the other week - our first holiday since Brighton last September and we were both feeling the need of it. Admittedly, I was more vocal in my need for it than he was, which is a good thing or we'd have just limped on. If there is one thing my Mum has taught me, it's that holidays need to be insisted on, and taken, with regularity.
Unlike my Mum, I did not insist on the Seychelles (where my Dad once played pool with Michael Schumacher's bodyguards), but on Northumberland, a county I have loved since I stepped foot in it about 18 years ago, and where we have friends who had been saying "come and see us!" for about a year.
So we packed some bags, handed keys over to the Kid, who was cat-sitting for us, and set out on what I anticipated would be a hideous journey as we were leaving on the day after a Bank Holiday. I have long refused to leave the house for several days either side of a BH on the grounds that the roads are chock full of drivers made crazy by the urge to get there-or-back-again in the shortest possible time. It only took one particularly long and winding journey for me to decide that it simply wasn't worth the candle. 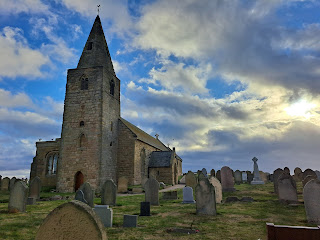 But, with one thing and another, this year, only this week was feasible, so I gritted my teeth, got behind the wheel and embarked on...a stress - and incident - free journey in which N navigated with aplomb (he is better than any sat nav in getting us out of lane closures and potential sitting-on-a-motorway-for-hours scenarios), and we arrived at Newbiggin by the Sea, which is exactly as it says on the town sign - by the sea, at exactly the time we'd planned to.
I have chalked this up to an early Christmas miracle.
Exploring around after a much-needed tea at the cafe, we found the church on the cliff top, looking out to the sea, surrounded by graves that are being eroded by the storms, and those superlatively big skies that Northumberland is so good at.
I mean, just look at it. Beautiful. I love the way it shifts and changes from moment to moment. 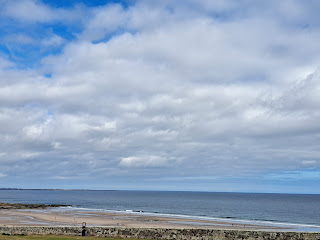 Most of these were taken the next morning at around 7am when I decided to take myself off for a walk along the beach front before N, and the rest of the world, got up. There was just me and some dog walkers, plus one very hardy couple bobbing gently in the sea. I quite envied them, being only brave enough to dip my toes. There is something about the way the North Sea sucks and roars at the sand that makes me wary. But I do long to be brave one day.
Still, the paddling was lovely, there is nothing like the feel of the sea rushing and foaming over your toes, sending a shock of cold whooshing up through your body. By the end of it, I'd thoroughly soaked the hem of my handmade (by me) skirt.
I'd also collected 5 coke cans and bottles, 2 red bull cans and an assortment of 11 other bits of rubbish from the sand, deposited by the tide. In turn, I deposited them in the town recycling bin which had the legend "DRY recycling only!" What does that even mean? Did these count as dry now I'd shaken the sea water out of them? I decided they did. 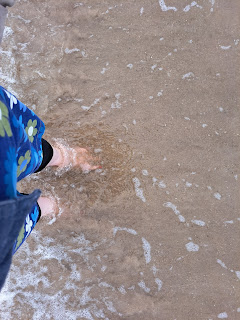 We spent that first day in Bamburgh with its castle on the high cliff above the sea. There was an aviation museum on site as well, full of incomprehensible information boards with tiny writing and complicated diagrams and models of planes that widows had "kindly donated after the sad death of their husband, Major Findle-bough Heetherstone-Pugh." I have been on the receiving end of those kind donations - "Eric was so keen for the museum to have them" - and let me tell you, each and every widow skips out with the relief of having got rid of "Eric's blasted models". It made me chuckle to see the same pattern being repeated.
It was also full of men staring intently at sprockets Aiii6b to Eivx9h and multiple cogs and levers. Occasionally a family would wander in with their perplexed children, the female of the group doing a pretty sharp about turn to find the cafe while the male got that peculiar eye glaze and rate of breathing that men get in museums like this.
My own male being on the mild side of this condition, I left him to it, preferring to watch the sea, imagining myself back to seeing the Vikings land at Lindisfarne (visible in the distance) and read up on my favourite legend - the Laidly Worm of Spindlestone Heugh. My favourite mainly because it's so pleasing to say. The title has a nice bounce and rhythm to it. Also because, as a child, I was very taken by the notion of the castle by the sea and that giant poisonous worms could be placated by milk. 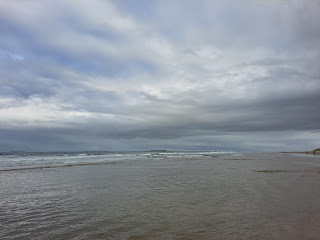 After the castle, we popped into the Grace Darling Museum, which was splendid. Oh my word. Ignore the castle (overpriced and a little patronising) and head here instead, give it the money you would have spent on castle admission as a donation. It Is Good. Renovated a few years ago (grant money from the HLF), it's still small but perfectly formed with the poignant details of Grace's life well told. Letters written by her, the shawl she wore during the rescue. The actual boat (coble) she and her father set out in.
It had a lovely line in interactives (something of a bug bear of mine, having seen too many swish tech options consigned to basements, broken after only a handful of months and too expensive to repair), where you pushed a button and it lit up a tiny figure such as Grace's father mending the nets, or her mother teaching the children.
Best best best of all, there was the challenge of setting the lighthouse light glowing. You had to select the 5 essential tasks in sequence; once successful, the light at the top of the 4-foot-high replica in the middle of the display lit up and flashed around the whole room. There were genuine cries of joy and delight when people managed to do this, me included. Yes, this cynical old museum professional was charmed. 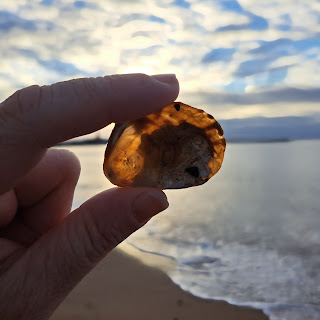 Then, the coast road back to Newbiggin, winding through little villages, listening to the sea through the open windows. Getting lost a few times but keeping our tempers because it was all so wide and beautiful, familiar and strange.
We did the things you are supposed to do on holiday - eat chips on the beach - and some of the things that you're not - write a quiz that should have been written before we left. We puzzled over hilariously divisive public art and soothed our sunburn under the wonderful rainfall shower (an absolute plus point of our Air BnB). 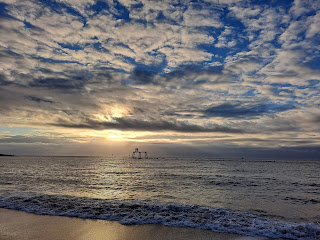 Next time, the story of the Lindisfarne Gospels gatekeeper and little Dink's Great Adventure.
- September 11, 2022