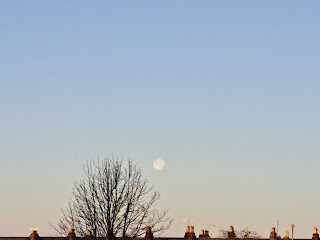 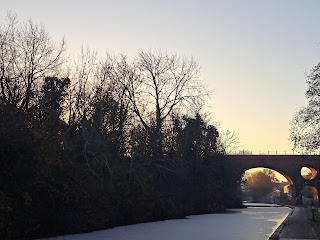 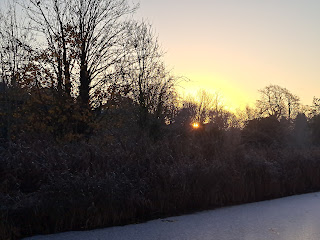 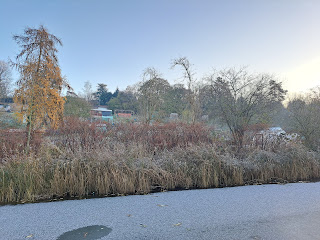 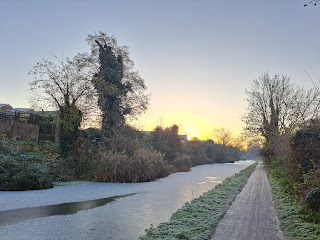 Like absolutely everyone down here, south of Birmingham, we were hit last week by a cold snap, and I could not have been happier. As a person whose temperatures naturally run high (maybe because I was born in the summer of 76?), I am at my absolute best when the ground outside is frosted and the air chill nips my ears red. Far from condemning the Snow Queen in Narnia, I have sympathy for her endless winters and the build up to Christmas being more exciting than Christmas itself.
I'm less with her on the turning people into statues issue, but hey, who doesn't have a character flaw or two?
So you can probably imagine my joy each morning as I would peer through the blinds to see a sparkling world, dressing hurriedly, so I could get a walk in before having to switch on the laptop for work. Pacing slowly along the canal in my boots and layers, more wool than woman, stopping to capture the light.
It was simply a delight to walk every morning, timing it so the school rush was over - or not yet begun - and the canal path was pretty much just me and a couple of hardy dog walkers. Joggers and cyclists moved to the main roads and left the space clear for us to wander at will, filling our eyes with the sparkle and snap of the morning.
The moon was bright and glorious each time while the sun cast benevolent halos that made me blink. The rushes and reeds glinted, bejewelled by the frozen droplets that turned them into living chandeliers. Leaves were etched, their veins picked out in silver, while mosses retreated into their own tiny frozen worlds.
I don't think I walked a straight line once, so dazed was I by how beautiful it was, by the patterns in the frozen canal, by the cloud of my breath spiralling up into the clear sky. 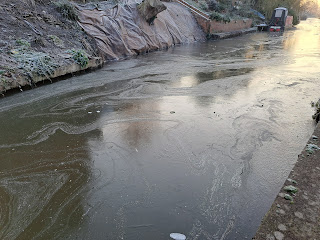 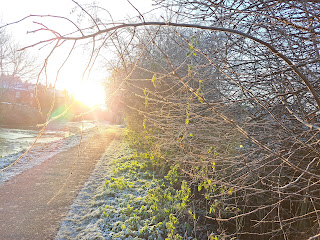 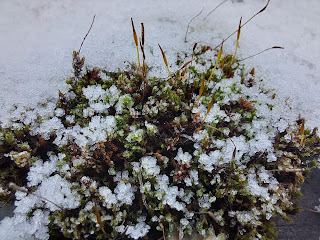 Tiny Wee Mabel enjoyed trying to catch the snow during one of the handful of flurries we had. Just 8 miles down the road, they were shovelling it off driveways. Friends in Wales and the Cotswolds made me green with envy as they showed off their magical, sparkling gardens, made mysterious and slightly eerie by the snow-quiet and pale light.
We are bunkered in for Yule now. Presents brought, wrapping still to be wrestled with. Food to be prepped (I'm making a magnificent trifle this time, after last year's pavlova affair). The day itself will be full of family; the day after just him and me, recovering from the previous day and letting our blood sugars slowly return back to normal. There will be large sandwiches full of turkey and stuffing and redcurrant sauce and, oh, all the trimmings, always so much better between 2 slices of thick bread the next day.
This isn't a good season for everyone, I know. If you are still deciding which charity to make a seasonal donation too, I heartily recommend this one, which I've supported for a number of years. Or, seek out one nearer to you. 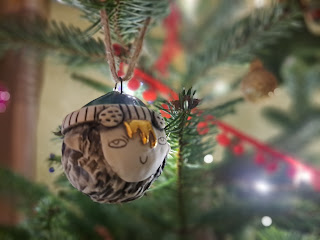 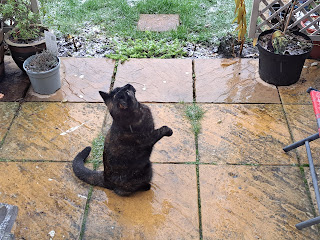 Email ThisBlogThis!Share to TwitterShare to FacebookShare to Pinterest
Labels: along the canal., charity, Christmas, walking, winter